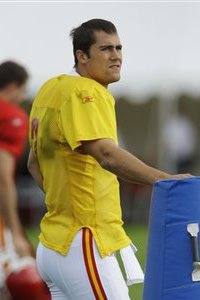 Don't get me wrong. I like Matt Cassel. I just don't love him yet. It's not a knock on Cassel. After all, he's only done all the right things, which is really quite impressive. But this weekend begins the real journey, the real test. It's not the regular season, but it is the official beginning of Cassel putting this Chiefs team on his shoulders and taking on the responsibility that only 31 other guys have to shoulder come opening kickoff.

It's one thing to have to come in when there's no pressure on you and perform well. And to his credit, an 11-5 season was entirely unexpected and, actually, a beautiful thing to watch. Cassel's performance was stunning, to say the least, in 2008, given the circumstances surrounding the season. And the Pats had to be more than pleased with his work. But there's also no pressure in that situation. If he didn't work out, well, that's what everyone expected.

It's an entirely different set of circumstances to be handed the keys to the kingdom and to lead from the outset. The list of guys who came in with no pressure to succeed only to flounder under the spotlight of being a first-stringer is long and Chiefs fans (and the front office) are hoping Cassel is not yet another entry on that list. I'm not declaring things one way or the other, but only wanting to point out just how different it really is to be the starting QB from day one versus the unexpected hero as a back-up. So far, so good, but we'll find out more this weekend.