Chiefs Stadium Looks Great, But What About the Ring of Honor?

Share All sharing options for: Chiefs Stadium Looks Great, But What About the Ring of Honor? 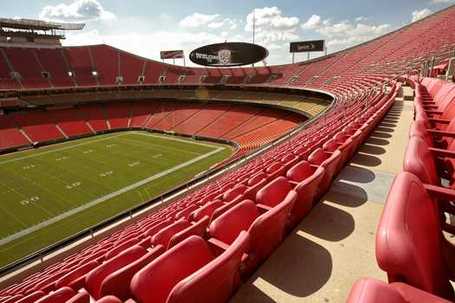 It's one of the earliest Chiefs memories I have.  I was around sitting in the upper deck with the old man looking around the stadium at about seven years old. 'Who's that?', I'd ask my old man, thinking he knew every detail about the Chiefs like I do now.

'That's Otis Taylor. One of the best receivers ever,' the old man responded.  Or, 'Lenny, the first winner in Kansas City.'  We would do the same with all the names in the Chiefs Ring of Honor.  Willie Lanier, Ed Budde, Bobby Bell and so many others.

You see, I only got to go to one game a year growing up.  The closest home game to my birthday, November 11th.  Occasionally I'd have a friend with an extra ticket but that birthday game was usually the one a year I went to.  The Ring of Honor is one of those things you don't notice on TV, especially as a kid.

But, I should hang onto those memories.  Because the renovations to Arrowhead Stadium have replaced the old, cool looking (in my opinion) Ring of Honor with an electric one.  The players names will be rotated in and out on the screen, not up there forever, like the old stadium.

I'm for the new stadium and the renovations.  I'm not for dismissing the Ring of Honor so easily.  I'll get over it but it's something that makes me sit back and think, 'Well, that's something that was really unique about Arrowhead.'  I'm going to miss it.

It's not just me that will miss it.  Randy Covitz of the Kansas City Star isn't thrilled with the idea of replacing the traditional Ring of Honor either.  Here's what he said last night:

Part of the charm and ambience of sitting in the stands of Arrowhead is gazing across and around the stadium and remembering the heroes of the Chiefs past.

I can't tell you how many players over the years have remarked to me how one day they wanted to see their names inscribed on the Ring of Honor alongside Len Dawson and Buck Buchanan, Willie Lanier and Bobby Bell, Fred Arbanas and Otis Taylor ...

I understand it was likely it a necessary part of the renovations on the stadium that will now seat 2,000 people less.

After reading about the Ring of Honor, I'm glad the Chiefs brass decided to renovate and not construct from anew.  If I'm upset about losing a string of names across the upper deck, then imagine what it would be like to lose the entire stadium?

Oh well.  I'll just have to "forget" about this with my $7.50 beer at the concessions.  There's scheduled to be a 'Chiefs Hall of Honor' complete by next season so maybe that can replace the old, cool looking Ring of Honor.

What do you think about the 'new' Ring of Honor?

Update: Josh Looney tells us a little more about the Ring of Honor's replacement