Michael Vick to the Eagles: One Year $1.6 Million, Option Year for $5.2 Million

Share All sharing options for: Michael Vick to the Eagles: One Year $1.6 Million, Option Year for $5.2 Million 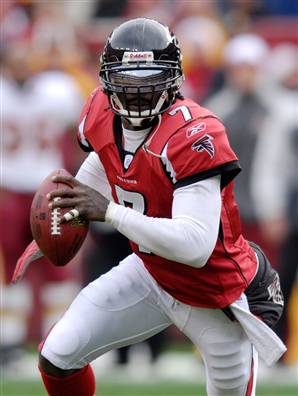 Chris Mortensen of ESPN is reporting that the Philadelphia Eagles have signed Michael Vick to a two year contract.  Vick's agent, Joel Segal, confirmed the signing to ESPN.com.

Update 8:09 PM: Just to be clear, I've tweaked the headline to this post to more accurately reflect the situation.  It's a one year contract with a one year team option.  The total value of the deal, if the Eagles pick up year two, could be $6.8 million according to Jay Glazer of FOX Sports.  Whatever.  He's not coming to the Chiefs.

Finally...the speculation of Vick to the Chiefs is OVER!  There was speculation, all over the Twitter, blogs and even reputable news sources like John Clayton of ESPN, that Vick was headed to this team or this team is still in play.

Many times that included the Chiefs.  But, as all you loyal readers of Arrowhead Pride know, the Chiefs had this to say when asked about Vick a couple months ago:

"The Chiefs have no comment regarding Michael Vick.  They haven't given any thought to it.  They don't want to be involved in any conversation about Michael Vick."

Then, on July 30th, one day before the start of training camp, Scott Pioli again said no to Vick on 610 and 810 radio in Kansas City.  But, the reports kept on coming.

Bill Williamson of ESPN heard what I was screaming over here and posted this on his blog last week:

There had been rumors that the Chiefs might show an interest in Michael Vick based on the fact that the Chiefs didn't say anything about the subject. But thanks to Arrowheadpride.com, that door can be closed.

Let the countdown begin: Philly heads to Atlanta in week 13. Head over to Bleeding Green Nation to see the reaction of Eagles fans.

Initial reactions to Vick signing with the Eagles?  Hey, at least it's not the AFC.

Update 8:00 PM: XtaC69Chief brought up a good point in the comments.  Will this affect the Eagles week three game against the Chiefs?  It could.  Vick is set to be suspended for a maximum of six games but, pending Goodell's approval, could return before then.  Vick is eligible to play in the final two preseason games so the Jaguars will face him first in Philly and then they'll head to New York to play the Jets.