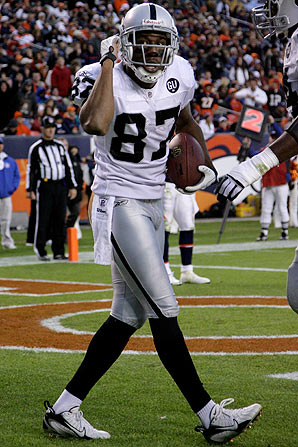 On 610 Sports this morning Kansas City Chiefs GM Scott Pioli said he could see 3-5 more players being added to the roster before opening day.

Apparently he's working on that.

Chris Hamblin of 610 Sports reports (via DTR in the FanShots) that the Chiefs worked out WR Ashley Lelie after practice today.   (Update: Now it's on his Twitter account)

Lelie has been underwhelming as a receiver throughout his career to say the least.  Drafted with the 19th overall pick in the 2002 draft by the Denver Broncos, he has amassed 3,749 yards and 15 touchdowns throughout a seven year career with four different teams.

The trend I notice there?  The final three those teams desperately needed wide receivers when Lelie was signed and they let him go after just one season (the Falcons traded for his rights).

His highlight and only full 16 game season includes a 1,084 yard, seven touchdown performance in the 2004 season with the Broncos.  Here are his career stats.

Former Bronco AND Raider?  This one would be tough to swallow.  If he couldn't impress at least one coaching staff in the last four years then I don't see him fitting in with the Chiefs. No matter how questionable the receivers are.

First thoughts on the Chiefs working out Lelie?