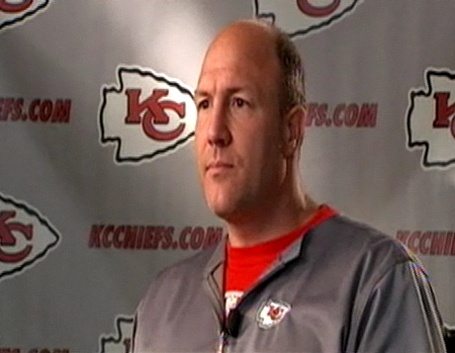 In a very recent interview, Scott Pioli was quoted as saying there will be another four or five players added to the final 53 man roster that aren't even in camp yet. Of course, there's no predicting who that will be since, well, they aren't in our camp. In fact, those unknown variables probably reside in the camps around the NFL's other teams - some of whom realize they're low on the totem pole and some who might be surprised when the cuts begin.

So I thought it might be a fun exercise to actually wager a guess who some of these players might be and then look back at this post to see if any one of us can get remotely close to guessing one or two players who might be around. The contest, then, is this: Name the four players you think will be wearing Chiefs jerseys for opening kickoff 2009 who aren't even with the team right now. We'll have a prize for the one who comes closest (which means one of us will probably get one right, if that).

My predictions after the jump:

-TE David Thomas - The former third round pick of the Patriots (2006) seems the odd man out with five Tight Ends in camp for New England. Alex Smith and Chris Baker were brought in the offseason to challenge Ben Watson and the new guy Tyson Devree seems fairly impressive given the group he's forced to work with. That leaves the slightly disappointing Thomas out in the cold. He's already gotten Pioli's attention once, so he's quite familiar with the former University of Texas star.

Thomas came out of college widely regarded as both an intelligent player and as one of the nation's top tight ends. He had 10 receptions for 80+ yards in the famous victory over USC in 2006 Rose Bowl and he set Texas records for most receptions and yards and touchdowns by a tight end. He's suffered some foot injury problems over the last couple years, but the potential is obviously here.

-DE Vonnie Holliday - I have a hard time believing we will feel totally okay with the pass rush and front seven we have in place and it wouldn't surprise me at all if a FA was signed in the next week or two off the street to play a prominent role. Enter Vonnie Holliday. He's already familiar with Kansas City and proved he had something left in the tank with his recent years with the Dolphins. Not saying at all that he's a lifesaver or anything, but just pointing out that he might be a potential candidate to be with the team.

-G/C Ryan Wendell - Wendell is another reach from Pioli's former team and is a versatile offensive lineman out of Fresno State. After going undrafted in 2008, Wendell signed with the Patriots and finished the season on their practice squad. With another new slate of rookies coming through Wendell might have a hard time holding onto a roster spot or even a practice squad seat and KC's lack of offensive line depth might provide an opportunity for Pioli to give him a real chance to earn a roster spot. As a center and guard, Wendell has the flexibility needed for depth.