Share All sharing options for: Kansas City Mayor Mark Funkhouser to Compete in Fantasy Football League with Other Mayors 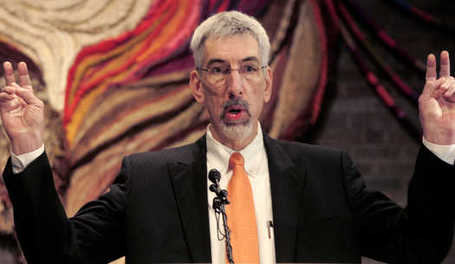 I know guys and girls. You're going to be sitting on the edge of your seat each week waiting to see how Kansas City Mayor Mark Funkhouser does in his fantasy football league.

Yes, Mayor Funkhouser is participating in an eleven mayor fantasy football league on Yahoo!. Who all is playing?

If you were reading AP way back in the day (2007), you may have caught our interview with Mayor Funkhouser. If you recall, his favorite sports moment:

I couldn’t tell you the year, but I watched an NCAA basketball tournament final when Bill Walton played for UCLA. I was kind of a Walton fan, and he had a run where I believe he shot 100 percent from the floor, rebounding, shot blocking. UCLA won, but just barely. It was the most remarkable single performance I’ve ever seen.

So the Mayor's first love may not be football but I think he's got a good shot of winning...as long as he reads Arrowhead Pride!