No TV Blackout for Chiefs, Texans Game on Saturday Night

Share All sharing options for: No TV Blackout for Chiefs, Texans Game on Saturday Night 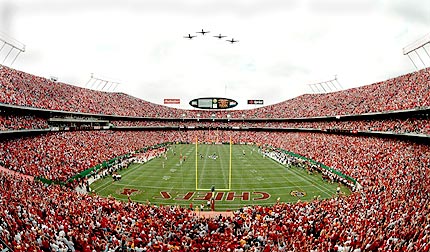 Hopefully soon we won't have to announce these sorts of things....

The Kansas City Chiefs first preseason game against the Houston Texans on Saturday night will not be blacked outaccording to a team official.

Maybe my request for you to fill Arrowhead stadium worked?  Let me continue to believe that (Please?).

The news comes courtesy of Randy Covitz at the Kansas City Star.

While the game might not be technically "sold out", enough tickets have been sold to satisfy the NFL rules regulating local television blackouts.

The rule was developed in order to encourage fans to buy tickets to the game instead of settling for the couch and a TV.  Has it worked?  For the Chiefs it has.

Kansas City hasn't been subject to a local TV blackout since 1991.  That's a streak of 149 consecutive "sell outs".