The Greatest Kansas City Chiefs, By the Numbers: #34

Share All sharing options for: The Greatest Kansas City Chiefs, By the Numbers: #34 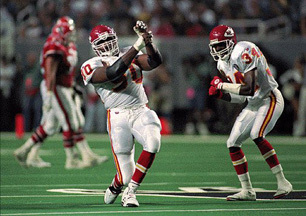 Wait just a second Dale. The homerun swing is Neil's.

Current #34 for the Kansas City Chiefs Londen Fryar, despite his legacy, can't top the pedigree of one of our greatest Chiefs candidates today.

IMO, Dale Carter runs away with this thing, despite his poor manners. I'm making a personal request to AP reader and commenter thehulk to relay his Dale Carter story. Let's hear thehulk. Just how bad did Dale Carter make you feel? 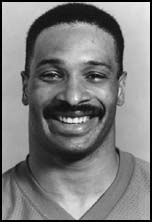 Burruss had a long and productive career in Kansas City, punctuated by a a 5 INT/Pro Bowl season in 1986 when he also had three TDs. He also played a little kick returner when he came to the Chiefs in '81.

He started 103 out of the 145 games he played in and finished his career with 22 INTs. Very solid player.

Burruss is the only Chief to win the Mack Lee Hill award (for most outstanding rookie); team MVP (1985); and be inducted into the Kansas City Chiefs Hall of Fame (1999). 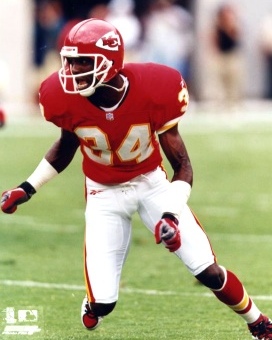 There's a lot to say about Dale Carter. But I'm going mention the fact that Carter snubbed Arrowhead Pride reader thehulk TWICE in 6th grade for a lunch appearances at St. Peter's middle school in Kansas City. I mean, it was springtime. What the hell was he doing that he couldn't make a school lunch for a contest winner? Anyway, the Chiefs eventually had to send Joe Valerio which was pretty cool in its own right.

If we owned could have afforded Dale Carter jerseys, we would have burned them. Plus we had that whole 10-year old kid fascination with fire going on anyway. Let this be a lesson to you Chiefs players - Don't snub a middle-schooler on a contest lunch because his friend may end up writing about it on a popular Chiefs blog fifteen years later. For some reason, this seems time for a Boo-ya!

Carter was drafted by the Kansas City Chiefs in 1992 out of Miss Arrowhead Pride's alma mater the University of Tennessee (Down here in Texas they get PISSED if you refer to the Tenn. school as UT). He won the NFL's defensive rookie of the year after posting seven INTs and one TD.

Carter played seven total seasons in KC, going to the Pro-Bowl four times (1994-1997). Through 1996, Carter also had quite a few punt and kick returns to add to his stats. He was an excellent corner on an excellent defense in the 1990s.

He know runs the Dale Carter Foundation, who's full time job is presumably to tell kids not to hang out with Tamarick Vanover.

Never attempting more than 49 rushing attempts in a season or 128 rushing in a season, Mike Cloud turned out to play below his second round potential. After coming out of Boston College in 1999, Cloud played for seasons for the Chiefs, gaining 381 yards rushing and four TDs.

Cloud went on to play for New England Patriots and New York for two years each, producing at a similar level for each.

Let's see...8th round pick out of Hawaii by the Chargers, five career NFL games (all with the Chiefs)... and two rushing attempts for his career. That's all on Willie Haslip. Dude is huge in Hawaii I bet.

Payton...where have I heard that name before.....

Eddie Payton is the older brother of NFL great Walter Payton. Eddie was pretty much a kick returner his entire career, playing for Detroit, Cleveland, Kansas City and Minnesota. He had 64 total returns for the Chiefs in '78 before heading to Minnesota to finish his career. He had no return TDs as a Chief.

Alright, AP. Who is the greatest Chief to wear #34?