Former Chief Will Shields Gets a Short-Term Job....with the Jets

Share All sharing options for: Former Chief Will Shields Gets a Short-Term Job....with the Jets 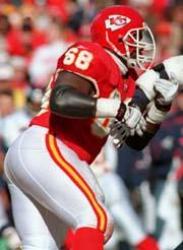 Former Chiefs coach Dick Vermeil and former guard Will Shields are in Cortland, NY (We're just now getting word that the team canceled practice and are at Hofstra for some sort of family fun night) this evening attending Jets training camp.

From what we can gather, Vermeil is there as a guest.  I've searched for his connection to the team but can't find it right off the bat.

Will Shields, however, is there on business.  He's working as an offensive line consultant with the Jets for a couple of weeks according to Adam Schefter (soon to be of ESPN, but currently of Twitter).  The connection here is current Jets FB Tony Richardson, who of course played in Kansas City for 11 years.

As recently as late July, Vermeil has said Shields is one of the best ever.  Any chance he gets, it seems like, he gushes about that offensive line led by Shields.  So, it's possible that the connection for Vermeil is Shields or Richardson.  They were all together on one of the best offenses in franchise history.

Doesn't Shields just seem like the perfect offensive line coach?  The guy is a fixture around Kansas City, helping out with charities here, donating money there, all the while being an incredibly respected member of the Chiefs during his time in Kansas City.  It's been noted time after time how many rookies looked up to him, and not only that, how often he was willing to help.

It does make me wonder, though, if Herm Edwards or Dick Vermeil were still in charge, would Shields be working as a consultant to the Chiefs, and not the Jets?

H/T JayKC in the FanShots