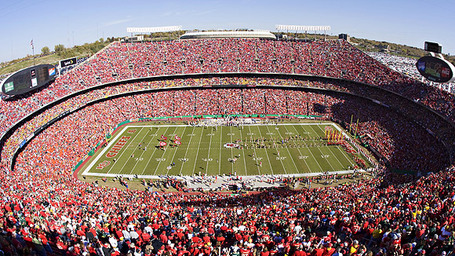 Because he's never been inside the stadium since taking the job on February 6th.

More Arrowhead memories after the jump.  Here's the full Q&A with video from the Mothership.

On one of his first memories of entering Arrowhead as an opposing coach:

"When we came with the Jets in ‘98 and the Chiefs were just coming off a long winning streak. They had just lost, I think, to Pittsburgh the week before which, in my superstitious mind it was if they had just lost now, then they’re going to go back on a streak and I figured we had no chance. It was a huge game for us and it was raining and in pre-game (KC) wolf was out there on his four-wheeler running the dummy of Chrebet over and the crowd was going and we heard the ‘home of the Chiefs,’ which is an intimidating start to the game."

The Chiefs started out the 1998 season 4-1 before being blown out in New England and losing a squeaker to Pittsburgh on Monday night.  That's when the Jets came into town.

The result of that game?

"We were able to win it in a tough game on a late field goal by Jon Hall. Dedric Ward, who was playing at that time, we put up in the small tight locker room and he said, ‘home of the Jets.’ We carried that with us all the way to the (AFC) championship game after every game.

"It was taken obviously from one of the great traditions. When you hear the crowd in the National Anthem finish with that it gives you chills no matter what side you’re on."

Here's the recap of that game.

The other time he was in Arrowhead:

"No, I was in a regular season game with the Bears where we got our butts kicked. It was a mess of a game."