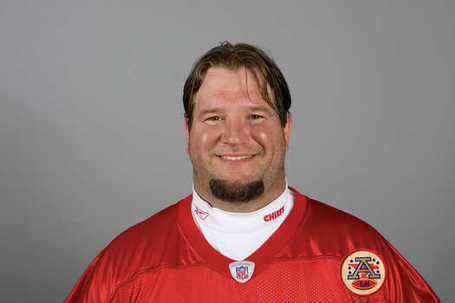 Yesterday, Kansas City Chiefs guard Mike Goff joined The Border Patrol on 810 WHB to talk about training camp and his addition to the offensive line.

Goff was previously on 810 back in July.  We talked about that appearance here.

Below are some notes I took on the interview.

On the difficulty of Todd Haley's camp compared to others:

The physicalness is unlike anything I've been around over the past six years.  The great thing about that is that it allows you to get that physical contact instead of going into the first game and getting hit in the mouth or something.  Because we go against each other so hard in practice.

It sets you up to really want to hit someone hard in that first preseason game and every game after that.  The fact that he has been running such a strict ship is something that needs to be done.

To build success you gotta have everyone believe in the system and I think that's what he's done.

On the defensive line:

Just because one of coach Haley's big things was he wanted us to lean up.  Ron's leaning up has helped his explosiveness and his agility and how he handles himself on the field better than when I was plyaing against him.  He's one of the many examples of the players that have lost weight to get leaner and build up your stamina.

Ron has learned to take what he's lost and transferred his energy onto the football field being more aggressive and more explosive.

On the offensive line:

I always believd that the offensive line is a team within a team.  That's one of the great things about training camp. Even though I'm the new guy on the team they've welcomed me in.

We've slowly started to build that trust within eachother so that you actually know what the other guy is going to do beore he goes and does it.  That's something that's very important.

And that's the key with training camp when you put on the pads and start going full speed and go at it.  That's just so different from OTAs and the offseason.  With training camp comes the repitititions you need at the high speed to simulate a game so when you go out there it's not something brand new to you.

I think we're slowly getting together where everybody's just buying in and getting ready to go give it our best. The only people that can really stop us is ourselves and I honestly believe that.

Everybody's got their eyes focused straight on the prize and we wanna be good.  We're ready to go.

You know what Brandon is, I think he has the potential to be one of the best tackles in the league.  His physical abilities, the way his mind is right, and how hard he works and how passionate he is about being a great football player...he's still young but I think that he keeps working the way he does and keeps practicing and keeps working his butt off...he keeps that up I think he's going to be one of the premier tackles in the league.

On Matt Cassel vs. Philip Rivers:

I think one of the biggest things of how he reminds me of Philip is how he controls the huddle. He doesn't have that stressed out voice but he's really relaxed. If he has a bad throw he's the first one to put it behind him. He has that presence in the huddle that every good quarterback needs to be successful in this league.

The way he holds himself it just commands respect. And when he speaks, people stops talking and all eyes are on him.  He has that presence that all good quarterbacks have and need to be succesful and I think that's probably the biggest thing.

He's not serious all the time and I think that's important.  There's a time for laughing and there's a time to get down to business and I think how he manages that is appropriate.  I think he's going to be a good leader for a long time.