Chiefs' Cassel Not Sure How Much He'll Play in Preseason

Share All sharing options for: Chiefs' Cassel Not Sure How Much He'll Play in Preseason 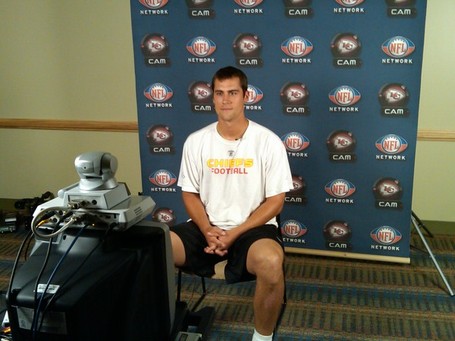 I'm more excited about preseason action in 2009 than in years past.  The offense and defense have significant changes which means there are less positions shored up which means the coaching staff will need more evaluation time from even the guys they think might have a chance to start.

Last year at this time there were only a handful of positions that were truly up for grabs.  This season?  Any and every position seems to be fair game.

One of the positions coach Todd Haley insists is still an open competition is quarterback.  Haley might be the only one that believes that (which, actually, is the only person that matters).  We, along with just about everyone else, has come to the conclusion that Matt Cassel will be the starting quarterback at Baltimore in week one.

Cassel talked last night with Fran Charles of the NFL Network.  The topics range from going from being Mr. Brady's teammate to Tom's teammate, surprising himself last year and getting ready to go up against another team.

I took notes on the complete interview, which you can find after the jump.  Or you can watch the video, courtesy of the NFL Network, here.

The interview starts off with a clip from a May 2005 interview with Cassel on the NFL Network, only a couple of weeks after he was drafted by the New England Patriots.  The host brought up the similarities between Cassel and Tom Brady including both being drafted to play baseball, drafted in the late rounds for football, Joe Montana fans and coming from California.

Here's what he said back then:

To compare myself to Mr. Brady, as I like to call him, at this time is a little far-fetched.  I've got a long way to go before we make those comparisons.

Of course, at the time, this comparison was outrageous and Cassel was quick to point out that he hadn't done anything yet. But now....there's still a little out there but not so far-fetched.

Here's the interview from last night.

Do you still refer to Tom as Mr. Brady?

No, definitely not, but I must say that was a pretty sweet tie I was wearing back then.

Did you think the last year would play out like it did?

I can't honestly say that it would ever play out like it did. It's been a whirlwind this last year.  Life-changing in every way possible.  To think any of it would work out this way, there's no way.

On being ready the last three years: 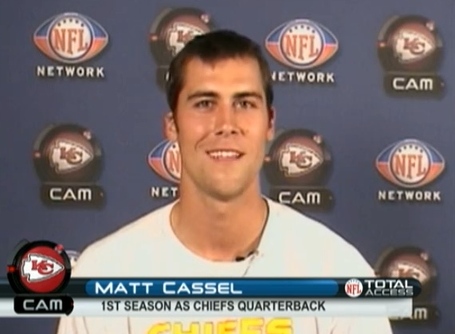 I prepared very hard for the last three years to get ready for that moment to come.  When I finally did get my opportunity I felt like I knew the system and was ready to step in and go.

Throughout the course of the year, the first few games I think we struggled a little bit, then I started to find my comfort zone and figured out what my receivers do well and then we started to move forward and I started to play well.  It's just a development process.

And as we move onto this year there's a bunch of new challenges that will come way. I know how to deal with adversity, I've had to deal with a little bit in my career, and now hopefully we'll take this in the right direction.

Does Todd Haley compare to Bill Belichick at all?

In many regards, he 's very similar to Bill.  He creates competition, he makes everybody accountable, he's yelling at people during practice.  In terms of an environment and how he approaches the team from a coaching stand point, there's not much change but more so a lot of similarities.

What kind of weapons are you working with in the receivers group?

We've got a lot of guys competing.  Dwayne Bowe's here, he's a big physical receiver and he's had a great last two years.   Then you bring in guys like Bobby Engram, Mark Bradley, Devard Darling's stepped up and had a great camp so far then you have Amani Toomer who we just brought on board.

We've got plenty of weapons and I think really, like any team, it comes down to playing together and understanding what we're trying to accomplish with each and every play.

Did you surprise yourself last year?

I think so.  You never know until you get in there and get under the line of fire of how you're going to react and how you'er going to play.  To go in there and play like I did, I was very happyw ith my accomplishemnts.

What are the expectations in Kansas City this year?

We have high expectations this year.

We don't know what this season will bring but I know that we're working hard and we've been working this whole offseason and we've made tremendous strides since day one of mini-camp to where we are now and hopefully we'll be able to go in and surprise some people this year.

Are you excited to go up against another team this weekend (Houston) instead of your teammates?

Fired up. It's always good to get out there and compete against your team but afer a while those corners start to jump routes since they've been seeing them for three weeks straight now.

It'll be fun to get out there and bang heads with somebody else.

How long will you play this weekend against Houston?

That's a good question.  We haven't been told anything so I'm expecting to just go out there and play and play as long as they tell me and have fun doing it.