The Greatest Kansas City Chiefs, By the Numbers: #33

Share All sharing options for: The Greatest Kansas City Chiefs, By the Numbers: #33 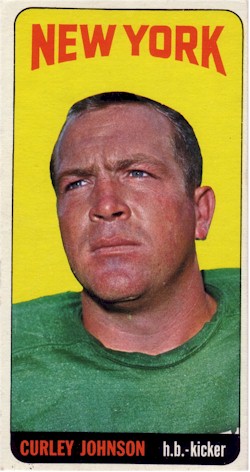 via Remember the AFL

Today's Greatest Kansas City Chiefs poll is a short one. And that's not for a good reason. RB Stone Johnson passed away in 1963, prompting the Chiefs to retire his number.

After the jump, more info on each of these guys.

Like so many of the early Dallas Texans, Curley Johnson hailed from Texas. Anna, TX, to be exact. Anna is about 40 miles north of Dallas.

Johnson was that fantasy player you don't see very often - the punter, running back and tight end. He only played one season for the Texans before heading to New York to play for three different teams - the Titans, the Jets and the Giants.

Johnson had one field goal attempt (which he missed); three punts; twenty-three rushing attempts and ten receptions in his one season for the Texans.

Stone Johnson's story is a sad one.

After participting in the 1960 Olympics as a sprinter, Johnson came to the Texans in 1963 and suffered a broken neck in a preseason game against the Oakland Raiders in Wichita, KS.

Stone died ten days later. His number was retired after his death.

Not much info to deliver to you about Billy Pricer. He played for the Baltimore Colts from 1957 to 1961. He had two receptions for the Texans as a fullback.

Not a very deep poll to vote I know but let us know who you think is the greatest Chief to wear #33.