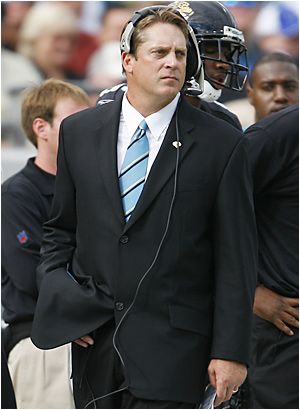 Well, at this point we're past the bye week, hopefully a nice time for the Chiefs to reflect upon their (predicted) 2-5 record thus far. It's a prime time to look at the highlights, realize you just went through the roughest stretch of the schedule (and one of the more difficult stretches for any NFL team) and came through still breathing and still fighting.

Jacksonville Overview:
Now it's on to the Jacksonville Jaguars. The good news for the Chiefs is that the next two games (including next week versus Oakland) are very winnable and could bring the team close to .500 again before the Steelers and Chargers match-ups. The Jags flipped their record last year, moving from a dominating 11-5 playoff team that nobody wanted to face to a 5-11 team that struggled on both sides of the ball. Their offense struggled and the defense lost the swagger that put fear in the hearts of opponents the previous four seasons (when the Jags finished in the top 10 in total defense every season).

So this year, coach Jack Del Rio aims to right the ship and some offseason acquisitions should really help with this. The problem has been the lines for the Jags, both offensive and defensive, so there's been some turnover here, as there should be. The team's first two draft picks went to promising bookend tackles Eugene Monroe (who the Jags had to be ecstatic was still sitting there at the eighth pick) and Eben Britton. Also, Eagles longtime tackle Tra Thomas was signed so the tackle position should be much improved.

The defensive line was addressed by adding defensive tackle Terrance Knighton, a 320 lb. hulk who should help solve problems up the middle after losing Marcus Stroud to a trade with the Buffalo Bills. However, the Jags also lost talented DE Paul Spicer to New Orleans which only creates further issues with depth and ability. The secondary also receives a face lift with Sean Considine coming over from the Eagles and Marlon McCree from the Broncos. However, both players were allowed to leave their former teams for a reason and aren't game-changing presences in the defensive backfield.

One of the biggest needs on this team has long been a gamebreaking WR and Torry Holt was signed to bolster the receiving corps while Jerry Porter and Matt Jones were given their notices to leave. It's still a position of need although hardly any team has such a talented receiver out of the backfield as Maurice Jones-Drew and Mercedes Lewis is an adequate TE. Holt should bring some skills not seen in Jacksonville for a long time, even if he is a little long in the tooth.

Prediction after the jump...

Why the Chiefs Can Win This Game:
The Jags areas of need are rather big and while there are reasons for hope, something tells me it might not all come together this season. The pass rush and defensive line overall have taken big hits the last two offseasons with Stroud leaving and now Spicer. Promising youngsters like Quentin Groves and Derrick Harvey were drafted to fill those needs but it remains mostly promise, especially in Groves' case. The Chiefs know all too well the issues with no pass rush.

The defense also let Mike Peterson leave from the middle so replacing the leadership there might be an issue this season. It's a younger defense that needs time to come together on the line and in the secondary, where former first rounder Reggie Nelson still hasn't blown anyone away and Derek Cox, this year's Division 1-AA grab, will need time to adjust. John Henderson provides some strong veteran presence as does Reggie Heyward and they will need to stay healthy for the defensive presence of old to really come back.

If the Jags fail to really gel this season, the Chiefs could be running all day on the d-line and middle linebacker like Daryl Smith. Sticking to Larry Johnson and Jamaal Charles as a change-up most of the day should work well. Unfortunately this would be a great game for Tony Gonzalez and the match-ups here so we have to hope Brad Cottam (or someone else) emerges to convert some third downs. Still, Bowe and others should enjoy decent numbers and this will be a game where the Chiefs move the ball.

Defensively, the Chiefs will wish Khalif Barnes was still manning this line, but that doesn't mean they're now impervious to the pass rush. Jones-Drew will cause fits all day so the Chiefs will need to have a strong game plan here, but the lack of a strong receiving corps will allow the Clancy Pendergrast to get creative with his blitzing schemes.

Why the Chiefs Could Lose This Game:
If the Jags mature faster than expected, this game could spell trouble. It's easy to look at the Jags as a team picking in the draft's top ten and forget that they went .500 or better the last several seasons, including 11 wins just in 2007. But Derrick Harvey could develop into a potent pass rusher and teaming with Heyward, they could wreak havoc on Cassel if the Chiefs right side doesn't come together.

And, simply put, Jones-Drew is a gamebreaker - one of a handful of players in the league who can single-handedly alter the outcome of a game by breaking a play wide open by capitalizing on a single missed read or missed tackle. The Chiefs have no one to answer for this (as hardly any team does), so this will be of paramount importance to plan well for this week. Luckily the bye week allows for just that.

Prediction:
Ultimately, I think everyone internally and externally realizes the season radically changes in the second half and even if the Chiefs are a bit beat up heading into the bye, Coach Haley will have them fired up and ready to go for the stretch run. It's a winnable game and good teams find ways to win games like this. It will be close but ultimately, Chiefs win 27-23.