The Greatest Kansas City Chiefs, By the Numbers: #32

Share All sharing options for: The Greatest Kansas City Chiefs, By the Numbers: #32

#32 is definitely a running back's number as you can tell from this list. We'll have two strong contenders today - Marcus Allen and Curtis McClinton. As you'll see, none of the other players have close to the contributions those two had as members of the Kansas City Chiefs.

Agee was a 5th round draft pick by Seattle in 1987. He played on season there, one season in KC and then finished his career in 1994 as a Dallas Cowboy. He had one rushing attempt as a Chief that went for three yards. 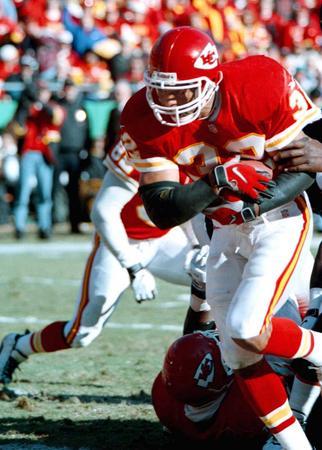 After eleven years as an Oakland Raider, Marcus Allen came to Kansas City in 1993 and tore it up.

Part of the team's running back by committee strategy that is now again all the rage in the NFL, in five seasons for the Chiefs Allen put up these stats:

Part of the veteran master plan the Chiefs were running in the mid 1990s, Allen helped the Chiefs to the AFC Championship game in '94 before retiring after the '97 season.

In two seasons with the Dallas Texans, Dickinson 106 times for 406 yards. He rushed for four TDs and added 17 receptions and another two TDs receiving to his KC stat total. Dickinson was drafted by the Chicago Bears in the 1957 AFL draft.

Horton was that rare TE/RB combo when he was drafted by the Kansas City Chiefs 15th overall in 1985. Expected to be the Chiefs' answer at running back. Instead, he was cut the next off season.

He had 28 receptions and 48 rushing attempts in his lone season in Kansas City. The Raiders picked him up and he completed 6 seasons in Oakland as a tight end.

Johnson was a fourth round pick by the Chicago Bears in 1957. He played in one game for the Dallas Texans at the end of his career. He registered no stats with the franchise.

A sixth round pick by the Chiefs, Jones played two seasons in KC. He registered one INT and played in 13 games during that time. He finished his career with the Bills and Lions. 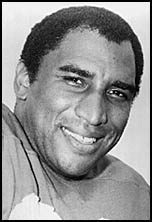 And we have our competition for Marcus Allen in this poll.

Drafted in the 14th round of the 1961 AFL draft, McClinton came out of Kansas University to play 8 seasons for the Kansas City Chiefs franchise. Wikipedia has more on this member of the Chiefs Hall of Fame and his AFL career:

McClinton was one of the early stars of the American Football League, with the Dallas Texans, and with their successors, the Kansas City Chiefs, and is the sixth-leading rusher in franchise history. He had 762 rushing attempts for 3,124 yards and 18 touchdowns. He also caught 154 passes for 1,945 yards and 14 touchdowns. He played in three AFL All-Star games, following the 1962, 1966 and 1967 seasons. He was named the Outstanding player of the 1962 affair.

McClinton played back up tight end on the Chiefs' Super Bowl winning squad. Here are his career stats as a Chief:

McClinton was inducted into the Kansas City Chiefs Hall of Fame in 1995.

A 5th round pick by the Oilers in 1983, Moriarty played the final 31 games of is NFL career in Kansas City. He garnered minimal stats as a Chief: 85 total attempts; 23 receptions and one receiving TD.

Reed was the 37th overall pick by the Chiefs in 1977.He played in four seasons, putting up some decent albeit underwhelming numbers. He rushed for over 2,000 yards on 513 attempts in four seasons.

Have at it. Who is the greatest Chief to wear #32?