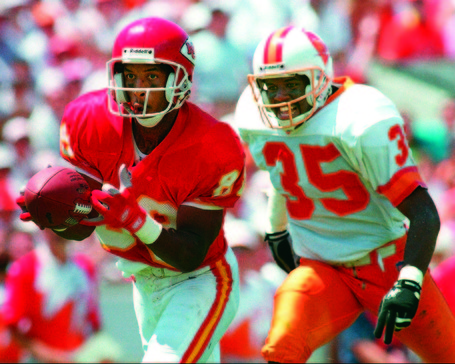 In case you missed it, don't forget to check out Part One of our interview with former Chiefs WR J.J. Birden. Here in Part Two, the Oregon resident continues to discuss Joe Montana, reflects on Derrick Thomas and gives us his input on the new Chiefs direction.

AP: How much of Montana's success was his talent level being heads above the others or how much of it was about that level of preparedness?

Birden: Yeah, it's a combination of both. Joe was clearly talented, even at 34 or 35 or 36. He still had the athleticism and he could still throw the ball. He could throw the ball for the best position for the wide receiver. He had a knack for throwing away from the DB. So if he threw it to you, you were going to be the one with the best opportunity to catch it.he would always throw it away from the defense.

I remember in the very first practice in the offseason, I ran a lot of X-Hooks and I ran one and he hit me in the back of the head with the ball. He told me, 'You need to understand something. I don't wait for you to get open. I expect you to be in an area and I throw it to that area.' Right away that taught me that I need to get my head around quicker and look for the ball. That was the first thing I learned.

The other thing is that he was a total student of the game. I was so impressed that as late as it was in his career, he'd been around that offense for so long and yet he still studied it like he was a rookie. He knew it so well. I remember, he would have this sheet of paper and he would just memorize the play and the other side is the formation. Most quarterbacks try to memorize all of it and then the offensive coordinator has to give them the whole play. But Joe would know the formation options for each play which was really incredible.

So if the coordinator said to run X-Razor, Joe would know which of the five different formations was right in that moment, he'd call it and look at the line and then realize he needed to change it. He was just so ahead of the game and I just remember having to memorize 200 or 300 different audibles because you just never knew which one he would call.

AP: What about your most exhilarating moment as a Chief, either personally to be a part of or what you saw?

Birden: [Pause] That's a tough one. I'd probably say the Denver game - the Monday night game against Elway. Even though I didn't catch the winning touchdown pass, I did have a good game that day. I remember I had a touchdown in second quarter. What I remember is that Elway had beat us or came back on us so many times. I don't even know how many, but if there was two minutes left, they were coming back. So that was the game where Elway finally didn't come back, but we actually came back.

That last two minute drive, catching a couple balls and then seeing the very last play was amazing. The play was X-Corner and I got double teamed and Joe rolled right and hit Willie [Davis] in the corner of the end zone. That was my most exciting moment being a Chief. I mean, they still show that game to this day and I still get a call every other month saying, 'Hey, you're on TV.' [Laughs] That was definitely a highlight.

AP: [Laughs] That's great. This is such a great time for Derrick Thomas and reflections on him. You were around for the seven-sack game and the 20 sack season. Just wondering what thoughts you had around this time?

Birden: Derrick was, first of all, just an unbelievable athlete. He was definitely one of those most athletic linebackers I've ever seen. He was very talented, a very hard worker. Game day, you had no doubt whatsoever that Derrick would show up. With some players, you wondered how they would do from day to day, but with Derrick, there was no doubt he was going to produce and cause havoc when the defense was on the field.

Getting to know him on the field was cool, but getting to know him off the field was cool as well. He was a kind of a prankster and crazy and just that happy-go-lucky guy. Obviously, his death was so tragic, but I am happy to see him voted into the Hall of Fame. At this stage, he definitely deserves it. He definitely had all the tools and all that qualifies you to be a Hall of Famer.

AP: What about some thoughts on the new Chiefs regime?

Birden: It's funny you ask me that. I was just in Aspen over the weekend visiting my in-laws and I'm at the gas station and guess who pulls up? It's Clark Hunt. I was like, 'What are you doing here?' [Laughs] He said, 'I'm getting a break before training camp.' So we were talking about camp and stuff.

But I'm really excited about the new regime and new addition of Coach Haley. I'm really excited about Matt Cassel. Having a quarterback of his caliber, I think he will bring out the best in the offense. I like how they're slowly putting this thing together and that they're doing it right. I'm looking forward to the time where they develop a winning program again and the Chiefs are winning every week.

I'm a Chief at heart even though I played for other teams. The Chiefs are really in my heart as an ex-player because that's where I spent some good years and was in my best time. I still stay connected to the organization going back there to alumni weekend so I will definitely root for them in the years to come.

AP: Just to wrap it up, can you tell us what you've been up to in the last decade-plus out of the game?

Birden: Well, after the game, I dabbled in coaching since I thought that's what I might want to do. But after one year of high school, I realized I didn't want to do it. I had enough football and even at the high school level, I thought it was too serious. [Laughs] I just really wanted to focus on my family and my home life, so I got into the business world. I became the owner of a few companies.

In the last couple years, I've been running a company - a physical therapy clinic - with a friend of mine, Lee Summit. It's there in Summit, Missouri called Summit Rehab and Wellness Center. I've been doing that the last four or five years and then the last two years, I've been involved with a healthy chocolate company called Xocai and that's where my future is. I read some literature on dark chocolate being a natural anti-inflammatory and it worked when I sampled the product. Then the rest is history.

But I live here in Sherwood, Oregon with my wife and three children and I recently gained guardianship over five nieces and nephews from my sister, so we've got the Brady Bunch over here. [Laughs]