Share All sharing options for: Chiefs Coach Haley Comments after AM Practice 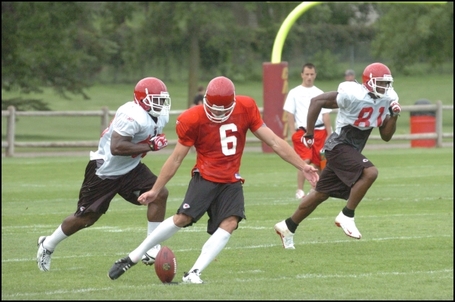 Today's practice placed a heavy emphasis on special teams.  Other than  few individual drills, including one that placed an emphasis on wide receivers catching the ball in traffic, it was mostly special teams.  According to several reports, head coach Todd Haley wasn't happy about a few mental errors.

The biggest surprise?  Dwayne Bowe ran with the second team.  We're not sure what happened but after practice Haley said of Bowe, "We are going to do everything we can to find players that do it our way."

Remember, we're not even halfway through camp at this point.  Haley is here to help Bowe make the leap from good to great.  We all know his teaching style.  Bowe's not being demoted full time.  I'm willing to bet my share of beer gloves on that.

On the heavy emphasis of special teams today:

"He works hard, he’s very physical, he’s smart," Haley said of Mays. "When he’s out there he runs the defense. He runs a tight huddle, a tight ship out there and he’s not afraid to get on the guys and get them organized to where they have to be; and he runs and hits. I like guys who run and hit."

On the players who came close to getting Darling'd (i.e. hearing it from the coach):

"Yeah, I was definitely frustrated," Haley said of the mental errors. "I want a mentally and physically tough team that is smart, specifially situationally smart. The game these days is almost all situations. You’re coming out, you’re in the red zone, it’s two-minute, it’s the end of the half, it’s short yardage, it’s goal line, it’s four-minute. In order to be a smart team you have to know what’s going on, you have to understand the situation and you have to almost do it without coaching."