Share All sharing options for: Figuring out the Chiefs Backup Quarterback Situation 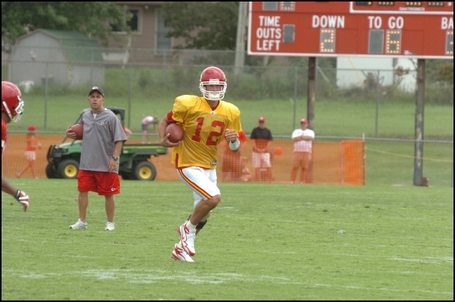 After today, I firmly believe Brodie Croyle is the No. 2 QB and that Tyler Thigpen is in danger of even making this team.

This comment via Kent Babb's Twitter page (@kb_kcstar...the info is worth following), was surprising to many of us.

I think, deep down, a lot of us knew this.  Without the offense the Chiefs employed last year to highlight his abilities (or the offensive line's deficiencies, or some combination of both), Thigpen was terrible.  In his first two games of extended action (pre-Arrowspread) he completed 42.9% and 38.9% of his passes.  Ugh.

I understand Babb's point, who says Thigpen hasn't been at his best this offseason.  The Chiefs might not be all that interested in a quarterback who needs the offense changed to perform to the best of his ability.

The other side would argue that he possesses a unique skill set and the Chiefs would be silly to keep Brodie Croyle on board over Thigpen.  This side's argument is simple: One can stay healthy, one can't.  Tough to argue.  One's skill sets are highlighted in a traditional offense set, one's not.

Judging by the comments in the FanShot of Babb's tweet, there are definitely two sides to this.

So, to gain a bit of clarity, I got in touch with Mr. Babb (one of AP's favorite reporters....kiss ass, I know) and asked him a couple of questions on the Croyle vs. Thigpen battle.

After the jump, you'll find my questions and Mr. Babb's answers.  And thanks, Kent, for taking some time.

Some people won't argue that Croyle is a better QB than Thigpen in a traditional offense but it's hard to ignore the added benefit of Thigpen's legs.  Are the Chiefs willing to ignore Thigpen's legs as an asset.....in other words, is it 'Conventional QB' or bust for them?

I don't think the Chiefs are ignoring what Thigpen brings, and it'd be foolish, I think, to ignore what happened last year.

That means that the Chiefs should keep in mind that Thigpen did fairly well as part of a sinking ship, and more than that, Croyle couldn't stay healthy for more than a few plays.  I do believe the Chiefs would prefer to have a pure passer, and that's playing more to Croyle's strengths.

Simply, Thigpen hasn't looked great in his first week of camp. It's still fairly early, but he needs to be sharper. It's a nice benefit to have a quarterback who can run, but that can't be all he's able to do.

Is it Croyle that's winning the job or is Thigpen that's losing the job?

If you ask me, it's that Thigpen is losing the job. Like I said, he's been pretty sloppy so far. 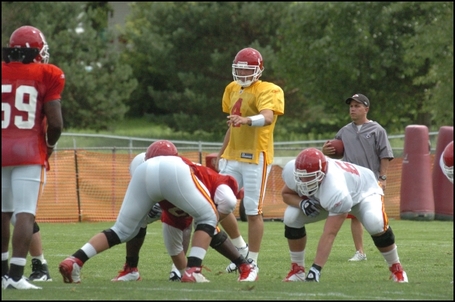 Just using yesterday's scrimmage as an example, Tyler's passes were off target more often than not, and that kind of inaccuracy will drive a coach crazy, especially one as impatient as Todd Haley.  People shouldn't expect Thigpen to be the NFL's most accurate passer. That's just not going to be realistic. But he's been a little wild through camp so far, and I can't imagine that's doing him many favors with this staff.

And as a result, Croyle -- who has looked fine, neither spectacular nor horrible -- seems to be passing Thigpen on the early depth chart.

Keeping only two QBs would be a very unconventional move.  Is there any chance the Chiefs will do that?  Would two of the backup QBs, say Thigpen and Gutierrez, really have to bomb for that to happen or do the Chiefs just have so many other needs at other positions?

There's a chance, but I think that'd be a mistake. If I were in charge of personnel for New England last year, I'd have been very reluctant to keep just Tom Brady and Matt Cassel, even if I knew Cassel could be a great quarterback. Too much can happen, with injuries or even the yips, that can plague a passer for a lot of games.

And let's face it: The Chiefs just don't have a stable quarterback situation right now. I've said that, if the Chiefs' top two quarterbacks were great, then fine, keep two.

Anybody want to argue that that's the case?

There's too much unknown on Cassel, and Croyle and Thigpen have huge question marks surrounding them. It's too early to tell whether Gutierrez has a shot of making this roster.

If I had to handicap the depth chart right now, I'd bet on Cassel starting, backed up by Croyle, and Thigpen as the emergency guy. Right now, this team would be making a big mistake to go with only two -- regardless of how many other positions need depth.