Share All sharing options for: Fumble at a Chiefs Practice? Run 200 Yards 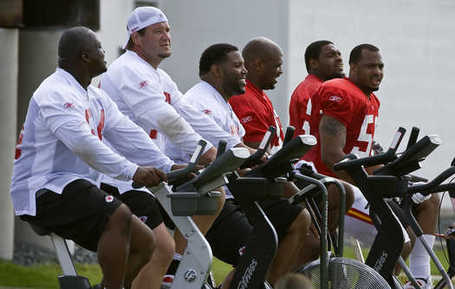 via David Eulitt of the KC Star

So says Josh Looney who's blogging training camp at the Mothership.

FUMBLE. The ENTIRE team is penalized wth a 200-yard run. Accountability is being preached during each session.

Jamaal Charles is the one that let the ball get loose.

All over the place, Looney also said via his Twitter account that Zach Thomas is "bringing the wood" today.

Linebacker Derrick Johnson and guard Edwin Harrison are not participating in the afternoon practice.  Johnson is believed to have "tweaked a hamstring" in the morning practice.  Harrison has some sort of injury to his right leg.

They'll join the nine others who didn't participate in the morning practice.

An old man and a young man taking turns in the punt return game.  More after the jump.

This is a major question mark heading into the 2009 season.  At this point, we have no clue who the return man is going to be and I doubt the Chiefs coaching staff does either.  But we do know, via Mr. Gretz at CBS Sports, that Quinten Lawrence and Rodney Wright were handling punts just a bit ago.

Gretz notes that neither player has ever returned a punt in a game.

Wright was picked up on April 7th.  Here's a little more information on him.

Mr. Looney also reported that Bobby Engram was seeing some time as a punt returner.  He has 102 career punt returns but only two in the last three years.  He had a pair of punt return touchdowns spanning the 2002-2003 seasons while with the Seattle Seahawks.

Am I one of the few that Bernard Pollard could be a Larry Izzo type Pro Bowl special teams guy? He showed some signs again today.