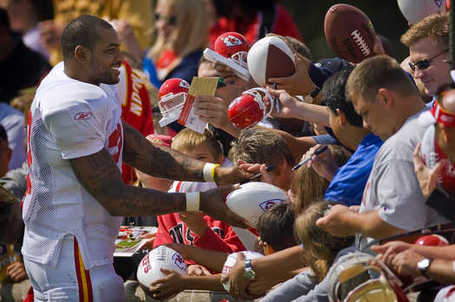 via David Eulitt of the KC Star

First, everything coming out about LJ has been positive.  And I mean everything.  He's slimmed down to 223 pounds, down from 235 last season.  He's rockin' the high red socks.  He has the best quote of camp so far, "I'm going to hit them like a bullet with some speed and not a tank."

Here's a full transcript of what LJ had to say.  Here are a few highlights:

On the change in attitude this year:

"For some reason it just clicked that way. When you have your back to the wall and things don’t always go your way, you have to reorganize your priorities and put your head down and go to work. That is what I have been doing since I came back to the offseason program."

"Yes. I like the organization I am in. (QB Matt) Cassel is a great guy as far as off-the-field goes and it is fun to have that camaraderie with everyone. LB Zach Thomas, LB Mike Vrabel, we are already getting into the O-State vs. Penn State thing. It’s great to have guys on your team that you are impressed with. I remember when I was a rookie watching Zach Thomas run up and down the field, it just feels comfortable."

After the jump we've got a few Todd Haley quotes.

On Mike Brown and the safety position:

"Like I said yesterday, every spot is open. I have some familiarity with Mike going back to Chicago. He’s been on winning teams and I think that gives him a little bit of an advantage."

"Matt’s Matt. He’s this way every day. He’s got great enthusiasm. He’ll be standing by me and I’ve got to tell him to be quiet five or six times."

We'll have more coming shortly.  Everyone is doing an outstanding job posting the various information here.  It's nearly impossible to stay on top of it all.  Keep it up!