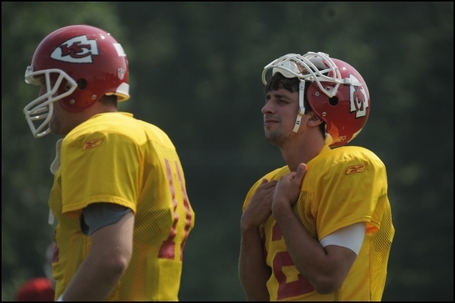 Remember last year at this time we were discussing Croyle vs. Huard....

Kansas City Chiefs quarterback Brodie Croyle is in pads for the first time since October 19th, when he suffered a season ending injury against the Tennessee Titans.

Per Mr. Looney at the Mothership, there are still no Chiefs decals on the helmets.

As I sit here in my Chiefs den at home, doing some blogging, I can firmly say I am GLAD to be here and not doing lineman drills in River Falls.  Per Mr. Looney:

The offensive opened up, as usual, by running plays "on air." Not very noteworthy…except for the fact that the linemen were pushing a five-man sled 5-10 yards on each snap (with three coaches riding).

Grabbing some coffee and I'll be back shortly.