The Greatest Kansas City Chiefs, By the Numbers: #14

Share All sharing options for: The Greatest Kansas City Chiefs, By the Numbers: #14

The list below has been pretty much the standard mix of Kansas City Chiefs players. You've got a few quarterbacks from the 1980s, a couple of guys from the AFL days and your random wide recievers. Current #14 WR/KR Quinten Lawrence would be lucky to duplicate the stats of one special teams ace below.

If you know your Chiefs history, then you know that only one of these guys has a real shot to win our poll today. Click through to see who it is. 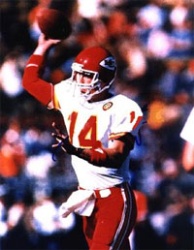 Mr. Blackledge, also known as "Not Dan Marino or Jim Kelly", was drafted by the Chiefs in 1983 with the seventh overall pick in the NFL draft. Famously, Blackledge was the big bust of the 1983 draft class.

Now you can catch Blackledge on Saturdays, where he is a co-host of ESPN's College Football Primetime.

The Chiefs second round pick of the 1992 NFL draft, Matt Blundin was a victim of some very unfortunate timing in his NFL career. Blundin played behind Dave Krieg that year at QB for the Chiefs, who just so happened to start every game that year. Then, in 1993, the Chiefs traded for Joe Montana. Suddenly, with Montana and Bono on the team, the third-string quarterback becomes the most competitive spot on the team.

Blundin was 2/0 passing in his career with one INT. He finished his NFL career in 1997 with the Detroit Lions. He is a high school math teacher today in Virginia.

Here is one very cool fact about Hunter Enis that I doubt you can say about anyone else - He played for every current AFC West franchise. The Dallas Texas in 1960, the San Diego Chargers in 1961, the Oakland Raiders in '62 and finally the Denver Broncos in 1963.

He was 30/54 in his one season with the Texans franchise.

Tom Greene must have been a nobody because I can't find any information about his playing career in KC on the Internet. If anyone from the Chiefs is reading this, shoot us some info.

Curtis Jackson was a fringe special teams?WR for the prolific Chiefs' offense in the early 2000s. He actually started the 2002 season on the active roster and was signed to another one-year deal in 2003. He never registered a catch in KC. 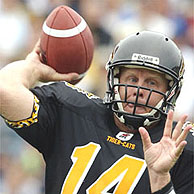 Danny McManus is a guy who is known for everything but his one season in Kansas City. McManus played for Florida St. from 1984 to 1987, winning the Fiesta Bowl in his final season. The Chiefs drafted him in the eleventh round of the 1987 NFL draft and he only dressed for seven games that season, not taking a snap.

After his min-stint in the NFL, Danny McManus went on to play for seventeen seasons in the CFL. He now does TV, mainly for CFL stuff.

Here's what you need to know about Bobby Ply, who was a pretty good DB for the Chiefs - He's one of a handful of players to have picked off four passes in one game. That happened back in December 1962. Deron Cherry also had four INTs in 1985. 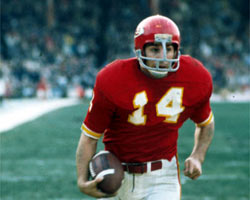 Podolak was a workhouse running back for his entire NFL career, which he spent all of in Kansas City.

To show Podolak's versatility, check out these stats from Wikipedia: Podolak led the Chiefs in rushing four times, in receiving three times, and in punt returns three times.

On Christmas day 1971, when the Chiefs lost to the Dolphins in the longest game ever played in NFL history, Podolak had a playoff-record 350 total yards. 85 yards rushing, 110 receiving and 155 yards on returns.

So who is Chiefs fans? Gotta be Podolak. No doubt in my mind he'll be the winner.