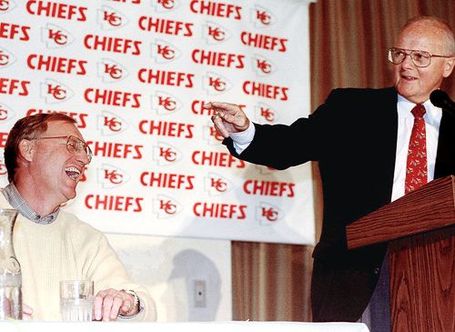 When Lamar Hunt coined the term "Super Bowl" in 1969, there's no way he could have known what meaning those words would take on.  Inspired by his daughter's red, white and blue super ball, Hunt's vision for not only the AFL and eventually the NFL has turned into the biggest sporting event in the world.

On August 8th, the same day the late Derrick Thomas will be enshrined, the Pro Football Hall of Fame will open a Super Bowl gallery in honor of the late Kansas City Chiefs owner.

Via Kent Babb of the Kansas City Star, the $2.4 million renovation project will officially cut the ribbon on August 8th in Canton, Ohio.

Hunt's son and current owner of the Chiefs, Clark, called the naming of the gallery in honor of his father a "meaningful tribute" to a man that died on December 13th, 2006.

"This is a tremendous honor for our family and a meaningful tribute to my father’s contributions to the NFL’s showcase event."

"From naming the game and assigning its Roman numerals, to suggesting the name of the Lombardi Trophy, the development of the Super Bowl is a substantial piece of my father’s professional legacy, and we are very proud that this beautiful gallery will bear his name."

According to Babb, the gallery will feature stories of how the AFL-NFL merger came about and stories of the first four Super Bowls.

Within the Lamar Hunt Super Bowl Gallery dynamic displays and exciting interactive video kiosks highlighting every Super Bowl, the great plays and the game’s stars, will complement the one-of-a-kind game artifacts that will permeate throughout the 4,000-square-foot space.

In addition to that, the Super Bowl theater will show the most recent Super Bowl, NFL Films-style.

Isn't it about time the Lamar Hunt trophy be returned to it's rightful owners?