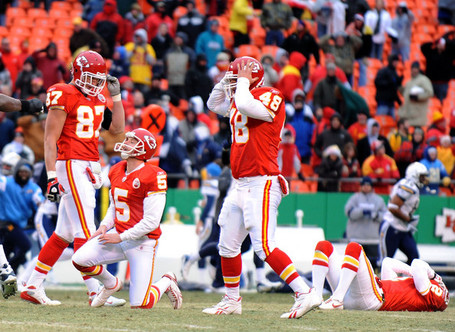 The Kansas City Chiefs announced the team has waived kicker Connor Barth.  This means that Mr. Irrelevant, Ryan Succop, has won the kicking job for the time being.  Here is the link to the two sentence release from the Chiefs.

Barth appeared in 10 games for the Chiefs last season.  While he was accurate (10/12), he never gave the coaching staff a reason to attempt many kicks outside of 40 yards (1/2).

Barth's two missed kicks came in one game the Chiefs lost (of course) but should have won (of course). Barth recently talked about those missed field goals.

"It really just fuels the fire and makes me want to work harder to make sure that next time that does not happen, because it's not going to."

He also recognized that he lives with the reality that every day could be his last as a Kansas City Chief.

"You never know if you're going to have a job or not. I had a good year last year; 10 of 12. But they still drafted a guy, Ryan Succup, who is a great kicker and who will compete with me. He'll push me and that's what it's all about."

With the Chiefs using a draft pick on Succop, albeit the final pick in the draft, it was assumed by plenty of folks that Succop wouldn't succumb to Barth.

Barth attended North Carolina where his younger brother Casey is poised to take over the starting job.  Barth was due a minimum base salary of $385,000 in 2009.