The Greatest Kansas City Chiefs, By the Numbers: #26

Share All sharing options for: The Greatest Kansas City Chiefs, By the Numbers: #26

I don't like current #26 Jackie Battle's chances in the NFL - he shares the same number and last name as Julian Battle! That's a curse if I've ever heard one.

Well, not really. Julian Battle ruptured his Achilles tendon and you're never the same after that. Why am I talking about these two? Because there isn't a whole lot to talk about with this list of players below. There are not exactly Pro Bowlers galore on there.

Adams started 12 games and played in 27 of them for the Browns, Ravens and Saints before coming to Kansas City. Vashone injured his knee during a preseason game in August 1998 and was put on IR before the season even started. He never played in the NFL again.

Allen was an average safety with the St. Louis Rams before finishing his NFL career in Kansas City. He played in 22 games for the Chiefs, making ten total tackles. 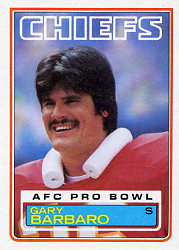 A third round pick out of Nicholls St., Gary Barbaro is pretty much what you want and expected out of a high draft pick spent on a safety. Barbaro played his entire seven season career, all in Kansas City. He played in 101 games...and started 101 games.

He had some pretty great numbers too. 39 career interceptions, including a 10 pick season in 1980. That season was the first of his three Pro Bowls in a row. 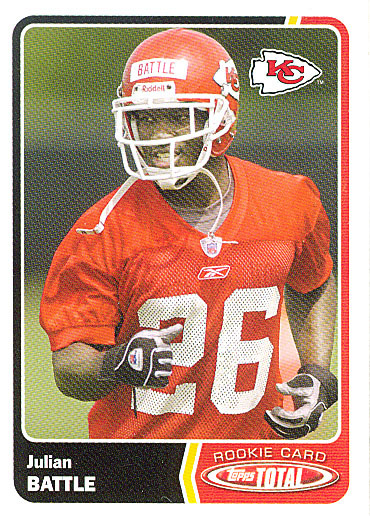 Larry Johnson is the only player left from the '03 draft and Battle was a third round pick out of Tennessee that year. The Chiefs had high hopes for Battle - at least as a nickelback to start his career - before he ruptured his Achilles tendon in June 2005. Battle was lost for the season and never made it back to the NFL.

When you think of Cris Dishman, you probably think of him as a Houston Oiler like I do. Dishman was brought in in 1999 to replace CB Dale Carter. Disman stepped into the starting corner spot of KC's defense for 16 games, regisering five INTs.

Jackson played five seasons for the Texans/Chiefs franchise, making the Pro Bowl in his final season as a wide receiver for the Chiefs. Like a lot of Chiefs players from this era, Jackson attended SMU before coming to Dalllas/KC.

Jackson had some very productive years in the middle of his career. His best seasons were 1963 and 1964. Jackson had 62 and 50 catches respectively, and added 17 total TDs in those two seasons.

A scab from SMU, Dozier played in two games during the '87 NFL strike season. He registered no stats and did not play in the NFL ever again.

Not a whole lot out there on this University of Mississippi grad. He played in one game for the Chiefs in 1984 and played in three games for the New York Jets in 1984. He registered no stats.

Oliver played for four teams in his four season NFL career. First with the Broncos, then the Chiefs, then Green Bay, Miami and finally Washington. He played in two games for the Chiefs, registering no stats in that time.

Drafted and then quickly dropped by the Denver Broncos, Lew Porter played in five games for the Chiefs. He returned a kick, made a few rushing attempts and caught a pass. That was the extent of his NFL career.

A 1986 Heisman Trophy runner up, Palmer was taken in the first round of the 1987 NFL draft by the Chiefs. Mainly a kick returner during his first season, never materialized into a true full time runningback. He caught 53 passes during his second season in addition to 134 rushing attempts.

Palmer was traded to the Cowboys in 1989 for QB Steve Pueller.

Watson was a 6th round pick by the Packers in 1993 and he played backup safety and special teams for the Chiefs. He played in a few games for the Chiefs, registering pretty much zero stats. He was arrested in May 1995 in the Westport area of KC.

West played two of his three total seasons in the NFL in KC, catching 13 passes over two years. He finished his career in San Francisco.

Alright AP readers. Who is the greatest Chief to wear #26?