Share All sharing options for: Chiefs' Gailey, Not Haley, Will Call Offensive Plays 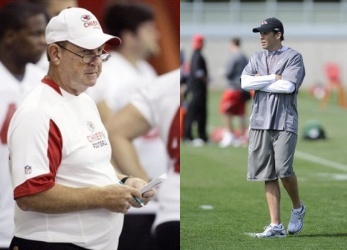 About a week after the Kansas City Chiefs hired Todd Haley, I laid out the two schools of thought that began to play out regarding the question of whether he'd call his own plays.

After conferring with coaching mentors Bill Parcells and Ken Whisenhunt, Haley has followed the latter school and will give that duty to offensive coordinator Chan Gailey.

Quotes from Haley (via Adam Teicher of the Kansas City Star) after the jump.

"This wasn't a decision that was made quickly," Haley said. "I put a lot of thought into it. Chan will call the plays as I see it right now. This is all part of the learning process of trying to get it right. That's where we'll start from, and I would say that's the way we'll go into the season."

Haley said calling the plays for the Super Bowl bound Arizona Cardinals last season was "the most fun I've ever had in my life." He said he has faith in Gailey and noted his previous success running "very good and very efficient offenses." A lot of us, including Haley, were impressed with Gailey's job as the coordinator of the 2008 Chiefs.

The wins were few but how many coordinators could change the offense midseason with so much statistical success?

"It was a similar situation," Haley said. "He was a creative play-caller for the Pittsburgh Steelers, and they went to a 15-1 season and then a Super Bowl and that's how he got the head coaching job with Arizona, but he set that aside (the play-calling) for me. Kenny turned that over to me, and we had success. We didn't win it all, but we came close."

Haley wants to be involved in the decision making with the offensive and defensive game plans but as far as calling plays he wants to maintain a healthy balance of letting his coordinators call the plays without becoming a distraction.

"Offensively, I'll look at myself as another brain to be utilized," Haley said. "I'll have ideas. Where I have ideas and thoughts I think can be helpful, I'll obviously have the power to implement those things on either side of the ball, plus on special teams. I'll prepare each week and study the opponent and understand our personnel and try to help where I can without being a distraction."

This is the move I favored. In fact, I advocated making Gailey the Chiefs head coach back in the January-February coaching search. After the hire, I argued that Gailey's playcalling was similar to Haley's. The Sporting News even ranked him as the 2nd best offensive coordinator in the NFL. Back in February, I asked this question in a poll. 72% of you said Todd Haley would not call his own plays.

One of my favorite Gailey stories comes from his time as the coordinator for the Pittsburgh Steelers when Kordell Stewart was there in 1996.

Chan Gailey, their Offensive Coordinator, came up with an idea. "Let’s make him a slash," he said.