The Greatest Kansas City Chiefs, By the Numbers: #25

Share All sharing options for: The Greatest Kansas City Chiefs, By the Numbers: #25 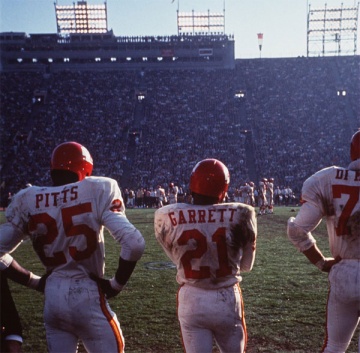 Another defense heavy Greatest Chiefs post for you this morning. The irony of this one is that the one of the few offensive players on the list should win this one. Current #25, Jamaal Charles, should end his career in KC at the top of the discussion for greatest Chiefs to wear #25.

Jump over to check out more on the history of #25 in Kansas City.

Collins won a Super Bowl with the Giants before coming to KC in the mid 1990s. Collins played corner in 1994 and then was moved to free safety in 1995.

Collings best season with the Chiefs, 1996, also saw him named the team's Most Valuable Player. In that season, Collins had six INTs and 81 tackles. He was dubbed Mr. Versatility while he was a Chief.

He was traded after the '96 season in order to save salary cap space. He left for Green Bay i 1997 and won another Super Bowl.

Being shipped around during the odd Plan B era of free agency in 1989, Danny Copeland was a 9th round draft pick by the Chiefs in 1988. He was mainly a return man during his two seasons with the team, returning 26 kick off returns in 1989. He would go on to play three seasons for the Washington Redskins, winning a Super Bowl in 1991.

I'm pretty sure that Epps, who was a K-State grad, was a scab player during the '87 strike in the NFL. He played in three games, starting two of them.

There isn't a whole lot to say about Hollis' Chiefs career. He played in 29 career NFL games and only two of those were with the Chiefs. Hollis' time in KC came sandwich in between his time in Seattle. He returned three punts while a Chief, for 28 total yards.

The Dallas Texans were Doyle Nix's final stop in his AFL career, which started in Green Bay in 1955. He had three INTs for the Texans in '61.

An AFL and NFL player, Pitts played nine years of professional football, the first six with the Chiefs. Drafted in the fourth round out of Southern University, had a slow first three seasons in KC. He only caught six passes during that time.

His prodcution increased in 1968 when Chiefs WR Otis Taylor went down with an injury. Pitts would go on to catch 30, 31 and 11 passes respectively to end his time in KC. Here is what his wiki page has to say about his contributions during the Chiefs' Super Bowl win in 1969:

Hank Stram told the play to Chiefs quarterback Len Dawson. "Listen, let's have a ... 9-0-8, 51 G-O reverse." As Dawson ran back to the huddle, Stram told everyone on the sidelines, "Here comes the reverse from Tight I, it could be wide open." Dawson took the snap, faked to Wendell Hayes on the left side of the line, then turned the ball to a sprinting Frank Pitts, who turned the corner and jetted down the right sideline for 20 yards. It was one of the biggest plays of the Chiefs' Super Bowl IV win over the Minnesota Vikings, and it set up Jan Stenerud's third field goal of the game.

Pitts ran the reverse again in the third quarter and picked up a critical first down. Otis Taylor scored on the next play.

Looking at the rest of these guys, I think Pitts should win this one hands down.

A runningback in Miami before coming to KC, Stradford was used almost exclusively as a return man while a Chief. He returned 22 punts and 14 kickoffs before finishing his career with the Rams and Lions.

He was also in the #24 list. No worries because I don't think he's going to win.

In 57 career games as a Kansas City Chief, Doug posted one sack and one interception. His son Keeston Terry committed to play college ball at Nebraska as a WR.

A second round pick in 1996, Tongue had four average seasons as a safety in KC before heading out. He started 47 games; had two INTs; and 215 tackles for his KC career.

Warner played in 19 games over two seasons for the Chiefs, snagging one INT and returned nine kicks. He finished his career as a return man in Buffalo. 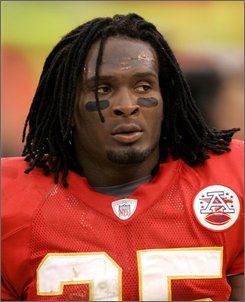 I always thought that Wesley got a bit of a bad wrap from Chiefs fans during his time in KC. I thought he was a pretty solid safety. He was a very reliable starter - he started 103 games in played in 118 of them. His best season was in 2003, when he posted 89 tackles and 6 INTs.

Wesley was a third round pick by the Chiefs and he would briefly be a an Oakland Raider after the Chiefs released him in 2007.

Wesson played for SMU before coming to the Chiefs. He returned seven kickoffs during his one season in the NFL.

Alright. Who's the greatest Chief to wear #25?