Share All sharing options for: Chiefs Branden Albert: 'Everybody's bought into the system' 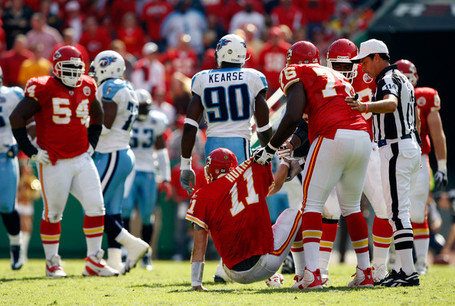 In a recent interview with Pro Football Weekly, Branden Albert of the Kansas City Chiefs talked about becoming a leader, buying into Todd Haley's system and maintaining focus.

In other words, he delivered the company line.

That's not necessarily a bad thing as last year the operation didn't seem to be as focused as it is this year and we saw the results. For example, upon the Chiefs arrival to River Falls in 2008, one security officer who has worked training camp in the past said things were louder and looser with all the young players on the roster. That's not the case this year to say the least.

Now there's a company line and it appears everyone is abiding by it.

"I think (being 305 will help me to) last through the game, you know, play longer and play quicker through the whole game, and I think it’s going to help me move even quicker now"

"I think it’s more focused, things are more locked down, things are more tight, it’s not as loose. I think there’s more of an attitude of, ‘We gotta get the job done — at any cost.’ We got the attitude that nothing can bother us at any time, and that’s gonna help us when games are close."

On the new regime:

In a variety of interviews throughout the season, Albert has given virtually the same answer to all these questions. He hasn't really gotten off track in providing what we're learning is the company line - 'More focused, in shape and intense'.

Click through to see more places we've covered Albert this offseason and you'll notice the it's all the same thing. As long as we're winning, that's fine by me.

"I actually like Coach Haley. He's a young, tough coach who wants to implement his ways. He's doing that very well right now. A lot of people felt we were out of shape last year but we're not out of shape this year. We've been training and working hard. He's been running us hard after practice. He's a tough coach that wants to win."

On becoming a leader (July 1st):

"I’m trying to be a leader, and I’m trying to win games. Coach Haley and Scott were on me so hard about: ‘You know what type of guy you can be. So why don’t you be that guy?'"

Sam Farmer of the LA Times on an interview with Haley (June 18th):

Haley says he's most excited about Chiefs finally getting into shape. Branden Albert, for instance, has gone from 345 to 303. Even some abs.

"He's a pretty good coach. He demands and expects a lot out of the players."

"Very demanding. He wants everyone to perform at the level they should."

"Not so much from that standpoint, but a guy that stood out to me is Branden Albert. He’s a guy who came in way out of shape that we were all pretty disappointed in. He kind of let himself go when the season ended and probably in-season a little bit. But the guy’s got his nose to the grindstone and he’s lost a lot of weight and is getting much stronger and practicing with technique. I’m pretty excited about what the possibilities are for Branden."