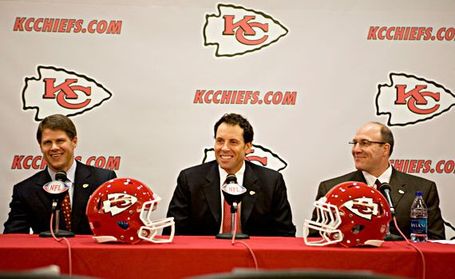 Will we ever see Todd Haley in a suit again? via (Photo Source)

As you all know (and complain about), we've been conducting approval polls once a month for the Kansas City Chiefs big three: head coach Todd Haley, GM Scott Pioli and owner Clark Hunt.  It's not exactly scientific but with hundreds and sometimes thousands of votes it's a good gauge of how the most dedicated fans are feeling about the men who make the decisions at One Arrowhead Drive.

The approval ratings of Haley and Pioli jumped back up again in July after dwindling in the months of May and June.

The reason for the May/June drop?  Likely the Tony Gonzalez trade.  Out of exactly 2000 votes, 58% of Arrowhead Pride readers did not approve of the trade. Scott Pioli took a nose dive following the announcement of the trade but seems to have regained the fans confidence with the contract extension of Matt Cassel.

Click through to see a jump each approval numbers each man has taken this month.

Whether it be the Matt Cassel contract extension or cooler heads prevailing regarding the Gonzalez trade, the vast majority of us have come to approve of the job at hand for the two main men in football operations.  Clark Hunt has done all he can this offseason and that shows in the 90%+ ratings we've given him since February.

When Chris and I started these approval polls it was really because we wanted to sit back after a year and get an outline of the entire season.  Pioli takes a 12% dive in May?  Oh, that's the Gonzalez trade.  Haley dips in April and May?  Ah, the handling of the Brian Waters situation (or whatever it may be).

I know some disagree with it but that's why there's the "Not sure yet" option.