Every time there's a vote on the numbers, we are subjected to seeing a name blotted out because of the words we all remember "wide left." In reviewing the post & comments, there was a blatant ommission and I believe a "re-vote" is in order.

Consideration should also be given to 5 year veteran (has it really been that long?) Dustin Farr Colquitt. Colquitt is known for putting a spin on the ball, making his punts hard to catch. 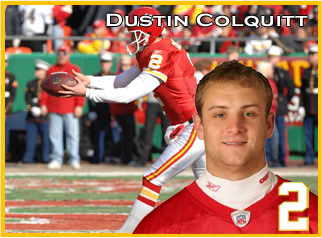 His Wikipedia page is brief but interesting http://en.wikipedia.org/wiki/Dustin_Colquitt

Colquitt comes from a distinguished lineage of punters in the Colquitt family, including his father Craig, who won a pair of Super Bowl rings punting for the Pittsburgh Steelers (’78-84). His younger brother, Britton, currently punts for Tennessee, and was a pre-season all-conference pick by some experts. Has a two sons Brinkley and Colston with wife, Christia.

His Chiefs bio has a lot of interesting stats:

Already owns the top spots in franchise history with a 38.32-yard career net average and a 43.66-yard gross average … Ranks fourth in NFL annals since the AFL-NFL merger with a 38.32-yard net punting average … Is second in club history with 104 punts inside 20, needing just 14 more to surpass P Louie Aguiar (117 from ‘94-98) for the top spot … Ranks third in team annals with 301 career punts, trailing only P Jerrel Wilson (1,018) and Aguiar (421) ... Joins San Diego P Mike Scifres as the only other punter in the league to finish in the top 10 in net average each of the past two seasons, accumulating a 39.2-yard mark over that span … Battled through a groin injury for much of the 2008 campaign, but still managed to average over 44.0 yards per punt and register over a 39.0-yard net per for a third straight campaign … Boasted a team-record 45.49-yard gross punting average in 2007, the second highest mark in team history behind only the single-season mark of 45.53 set by Wilson in ‘73 … Enjoyed a breakout season in 2006 when he led the NFL with a 39.3-yard net average … Has accumulated 82 punts of 50+ yards in his young career … Puts an unusual spin on the ball, frequently causing difficulties for return men … Comes from a distinguished lineage of punters in the Colquitt family, including his father Craig, who won a pair of Super Bowl rings punting for Pittsburgh (’78-84) ... Has played in 62 regular season games … Owns 301 punts for 13,141 yards (43.7 gross, 38.3 net) with 104 inside the 20-yard line and 27 touchbacks … Also has three special teams tackles … Has played in one postseason contest, producing six punts for 314 yards (52.3 gross, 47.7 net) with one inside the 20-yard line … Originally joined the Chiefs as the team’s third-round draft selection (99th overall) in the 2005 NFL Draft … Was the first punter drafted by the club since P/K Robbie Keen in ‘91.

Who is the greatest Chief to ever wear # 2?