The Greatest Kansas City Chiefs, By the Numbers: #24

Share All sharing options for: The Greatest Kansas City Chiefs, By the Numbers: #24

Brandon Flowers is the current #24 and he honestly has a chance to be the best our of all of these guys. In fact he may be already.

Many thanks to those of you who helped me put this info together on our Google doc experiment. I think with more time we could have had this done entirely by the community.

I woke up a bit late today (second time in my life) so you may catch a couple of typos. Click Continue Reading to go on the magical historical journey that is the Kansas City Chiefs #24....

Defensive back (6'1", 200 lbs) who came to the Chiefs as the 54th overall pick (2nd round) in the 2000 draft out of Oklahoma. He played most of the time as a cornerback, but switched to safety when Ty Law was acquired, just in time for Pollard and Page to take his spot. Had 235 tackles over his six seasons as a Chief, with 2002 being his best year at 84 tackles. Never had an interception, but had 3.5 sacks over his career. He was injured during the 2006 season and released after that year.

A special teams start during his tenure in Kansas City, the only stats Belser registered while in KC were a couple of punt returns he picked up. His son Jason played two seasons for the Chiefs from 2001 to 2002 after a long career with the Colts. 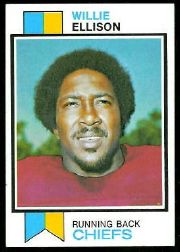 Ellison spent almost his entire career in St. Louis as a Ram before heading to KC for his final two seasons. He didn't play too bad in KC either. He rushed for over 500 yards and two TDs as a fullback. 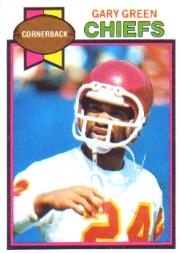 His son, Gary Francis Green II, is on full scholarship at Kansas. He once opened a seafood restaurant which he calls the biggest mistake of his life.

Pro Bowler with the Chiefs in 1982-1983. Team captain 5 times. He was on the Bob Hope Christmas Show after being selected an All American at Baylor.

Kaiser appeared in one game for the Chiefs and didn't record any stats. He was signed to the team's practice squad mid season, called up late in the season and not resigned. He spent part of one season in Dallas in 1999 and didn't play football after that.

McMillian was born in St. Louis and attended MU. He had a cice career with New York Jets. In 1993, played 6 games with Philadelphia, then 1 game in KC, and finished with 3 games in Cleveland.

"Pearson had to be one of the worst DBs in memory for me. He clearly was an asset for the opposing offenses. There were the countless games against the Broncos. Once during a game when the mike was at the field level you heard John Elway basically call out 24...24....24 and he went right at JC for a big play. I remember the Houston game, who could forget forget the run and shoot with Warren Moon. Pearson was responsible for the slot receiver Hayward Jeffries. He had 245 yards against Pearson. Anyone who gives up that kind of yardage cannot be considered a great.

I could never figure out why a guy like Pearson continued to be put on the field, especially with such a good defensive mind like Schottenheimer. Oh well here is to saying that #24 Pearson should not be considered for the ring of honor anytime soon." TG- in Marina Del Rey

Now an announcer for the Chiefs on KCTV 5, Pearson was member of the Chiefs' secondary along with Albert Lewis and Deron Cherry.

"Jaycie Pearson was the worst Chief to ever wear #24. There is a NFL films video of John Elway saying, "whenever he would come to the line of scrimage against the Chiefs - his first read was to look for #24, because whoever #24 was covering he know he was going to throw the ball to that receiver. If anyone watched the Chiefs during this era knows JC Pearson was the worst defensive back the Chiefs ever put on the field. He was so bad my brothers (who are Cowboys fans) and I would compare him to Ron Francis #38 who was the Cowboys worst defensive back ever.

Also, I find it extremely difficult to listen to JC commentate NFL games, especially Chiefs games, and tell the listener how it used to be on the field when he played - and give advise. Please - when he talks I just cringe. He doesn't know what he is talking about because he was a terrible player and should have never been on the field. As a matter of fact, when he went to play for the Vikings I could not believe my eyes - another team wants this guy - there is no way." -Mark from Sacramento

In 57 career games as a Kansas City Chief, Doug posted one sack and one interception. His son Keeston Terry committed to play college ball at Nebraska as a WR. 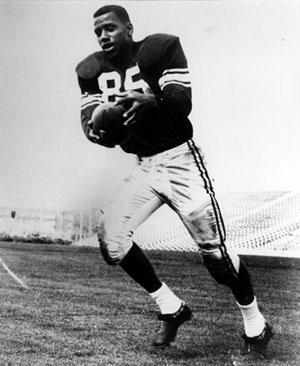 Williamson played three seasons for the AFL’s Kansas City Chiefs. During his time with the Chiefs, Williamson became one of football’s first self-promoters, coining the nickname "The Hammer" — because he used his forearm to deliver karate-style blows to the heads of opposing receivers.

He finished his career in KC and did so with some solid numbers. He played in 37 games and made 11 INTs.

And a story from his Wiki page:

Prior to Super Bowl I, he garnered national headlines by boasting that he would knock Green Bay Packers starting receivers Carroll Dale and Boyd Dowler out of the game, stating "Two hammers to (Boyd) Dowler, one to (Carroll) Dale should be enough". His prediction turned out to be ironic, because Williamson himself was knocked out of the game in the fourth quarter, his head meeting the knee of Packer running back Donny Anderson.

Born in Carthage MO, Wright played for Cleveland and Minnesota from 1985 to 1992 and then finished his career with Kansas City in 1993. Felix started 0 games and accumulated 0 stats in Kansas City.

Who is the greatest Chief to wear #24?