The Greatest Kansas City Chiefs, By the Numbers: #23

Share All sharing options for: The Greatest Kansas City Chiefs, By the Numbers: #23

I'm not going to lie to you guys - these mid-20 numbers are going to be painful. Take a look at the list below. I bet you don't remember half of the players listed.

But that's why you come here, right? To learn of course!

Click Continue Reading to learn more about the history of #23 in Kansas City... 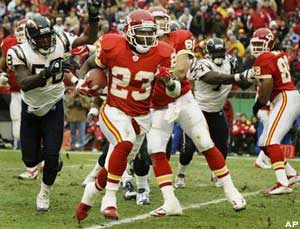 The Kolby Smith of the early part of this decade, Derrick Blaylock has played the role of backup runningback wherever he's played. For four seasons in KC, Blaylock backed up Priest Holmes and then Larry Johnson. He was also breifly a member of the Washington Redskins in '07 but never made it through training camp, instead ending his time in DC with an injury settlement.

Nailed it. Blaylock's best game as a Chief came in that monster game against Atlanta back in October 2004 when the Chiefs put up eight rushing touchdowns against what was then a top ranked Atlanta defense. Priest had four TDs in that game as well. 2004 was Blaylock's best season too. He had eight total touchdowns that season and started five games in place of an injured Holmes. For his career in KC, Derrick rushed 156 times for 723 yards and ten TDs. He also caught 45 passes.

An AFL only guy, Bert Coan played the '62 season in San Diego before finishing his career with the Kansas City Chiefs. He made a handful of rushing attempts and kick return attempts each year with the Chiefs. The most carries he had in a season was 96 in 1966. He also scored seven touchdowns that season.

When the Chiefs added RB Mike Garrett in 1967 and he had a monster season, Bert Coan became expendable.

Bert Coan may actually be best known for pissing off Jayhawk fans for decades now. Here is that story from 1960:

Coan played for Kansas - and helped the Jayhawks win the 1960 game by a score of 23-7 over Missouri, then-ranked #1. But later, the NCAA declared Coan ineligible, due to a recruiting violation by Bud Adams while Coan was still at Texas Christian University (TCU) and the game was forfeited. Missouri (and the NCAA) considers the 1960 game a victory for Missouri, while Kansas argues otherwise. Ever since, the two universities have disputed the overall win-loss record in the long-running series.

If I had to live in Lawrence, KS, I'd be perpetually pissed off too.

Mainly a returner during his two seasons on KC, the Arkansas grad played quite well but was hampered by injuries. First, Dickerson broke his toe midway through the 1993 season. Then, next year, he busted up his knee in Week 12 and the Chiefs put him on injured reserve.

He returned 32 kickoffs in two seasons, averaging 22 yards a return.

Drafted in the 5th round out of Missouri, Earl Gant had 56 rushing attempts in his rookie season in KC. He also caught 15 passes that year. Unfortunately, Gant was put on injured reserve midway through his second season and he never played football again.

There isn't a whole lot of info out there on Gant so I'm going to assume that his injury and his five fumbles in two seasons had a lot to do with him not making the team the next season.

Gray was drafted by the Seattle Seahawks in the second round of the 1993 NFL draft, where he played for four seasons before bouncing around to Indianapolis, New York and finally Kansas City. He started one game for the Chiefs and registered no stats.

Here is a funny snippet from training camp 1999:

The day's festivities started when Chiefs tackle Marcus Spears removed his helmet and clubbed a New Orleans Saints opponent over the head with it.

They ended when Chiefs safety Jerome Woods decked an opponent after a play, and Chiefs cornerback Carlton Gray pummeled the same player with his fists.

A 3rd round pick by the Chiefs, Hadley rarely played in his two seasons in KC. He registered on INT in 1971 and that's it.

The cornerback Greg Hill was a semi-regular defensive player, starting only a few games but playing almost 80 games in his KC career. His most successful years were from 1984-1986, when he snagged two, three and three INTs respectively.

What can you say about Clyde Johnson that hasn't already been said?

An undrafted free agent safety from K-State, Johnson barely snuck on to the Chiefs' roster in 1997. He was cut near the end of the season to make room for another player. That would be the only time he was on an NFL team.

Drafted #3 overall by the Eagles in 1969, Keyes was that rare runningback/strong safety combination. He was a runningback during his first season in Philly before making what looked to be a permanent switch to defense after that. He played in three games in his one season in KC, rushing the ball twice and making one reception.

Coming to the Chiefs in three way trade, Smith's stop in KC was nestled between his career as a Ram, Charger and Bill. His season in KC was by far his best - intercepting three passes, returning one of those for a TD and starting 13 games. His interception return for a touchdown was in the final game of the '83 season, when Smith took an Elway mistake to the house.

Swink's name will be remembered for his play in college and not in the pros. He went to TCU and is known as one of the greatest running backs in Southwest Conference history. He was an All-American as a junior and a senior and placed second in the Heisman Trophy voting his junior year.

Despite being drafted by the Bears in 1957, Swink decided to head to medical school instead of the NFL. Lamar Hunt convinced him to play for the Texans in their innagural season in 1960 but Swink left halfway through the season. It appears his heart wasn't in football.

Barry word was the ACC player of the year in 1985 and was drafted by the New Orleans Saints in 1986. But, him and two other Virginia Cavaliers were indicted on cocaine distribution charges and Word spent five months of the '86 season in prison.

He barely played in 1987 and then left the Saints two games into the 1988 season. He sat out the 1989 season entirely before coming to KC.

Barry Word had a solid three seasons in KC teamming up with Christian Okoye to produce a large rushing attack. Word rushed for 1,015, 684 and 607 yards respectively during his time in KC. In his fifth game back in the NFL in 1990, Word rushed for 200 yards on 18 carries against the Detroit Lions, by far his best day in the NFL.

The addition of Marcus Allen in 1993, along with RB Harvey Willliams on the roster, meant Word was expendable and he was let go. He played two more NFL seasons with the Vikings and the Cardinals.

From the info I've been able to find, Kevin Wyatt was a kick returner who botched a kick return by fumbling in Week 3 of the '87 season. He only played in two games for the Chiefs before leaving football entirely.

Alright, Let's have at it. Who is the greatest Chief to wear #23?