The Greatest Kansas City Chiefs, By the Numbers: #22

Share All sharing options for: The Greatest Kansas City Chiefs, By the Numbers: #22

Current #22 on the Chiefs' roster is Jackie Bates, who was signed in the early hours after the NFL draft this past April. The list below isn't exactly a stellar one, having a severe lack of talent compared to most of our other Greatest Chiefs posts.

Johnny Bookman played three seasons of professional football and his stop in KC happened in between stints with the NFL NY Giants and the AFL's New York Titans. In his one season with the Texans in 1960, Bookman had four interceptions. He had 13 INTs for his career.

Carter was drafted by the Cardinals in the fourth round of the 1994 NFL draft. He played one season for the Chiefs before finishing his sentence career in Oakland. He played in two games for the Chiefs, registering no stats. He is currently an assistant with the Texans.

Cocroft was a college free agent defensive back who made good during his three seasons in KC. He played in 44 games while in KC, starting one of them. He garnered 6 INTs as a Chief in addition to forcing a couple of fumbles. It must have been tough trying to crack the starting lineup with Albert Lewis ahead of you.

Grow played two seasons in the NFL, heading to Jacksonville (and the Super Bowl) in 1995. He played in 15 games for the Chiefs in 1994, starting none of them and snagging one interception. He also recovered and forced a fumble.

Hagy played for the Bills after being drafted by them in the 8th round of the 1988 draft. He didn't register any stats with the Chiefs, which makes me assume he was at training camp but didn't make the cut.

Harrison played one season in the NFL after coming out of Georgia. He carried the ball 8 times and was used mainly as a return man that season. He ran back 13 kickoffs for an average of 21 yards a return. He also had a punt return for a TD in the preseason, which probably cinched his roster spot.

Undrafted out of Kent State, Jakes played in 22 games for the Chiefs, starting one of them. He registered no stats whlie with the Chiefs.

Here is a good summary on Marshall's Chiefs career:

With the Chiefs, Larry returned punts and kickoffs in 1972 and 1973. His 28.2 yard average kickoff return during the 1972 season still ranks as the third best in the history of the Chiefs, and only one yard behind Dave Grayson’s average in the 1961 season. At the conclusion of his rookie year, Larry received the Mack Lee Hill Award.

Marshall returned 53 punts and 44 kickoffs in two seasons with the Chiefs.

Undrafted out of Ohio St. in 2001, McClellion was signed by the Chiefs in late January 2002. He had knee problems and was unable to practice throughout training camp. He was put on the Physically Unable to Perform List (PUP) and didn't see any action in the NFL ever again. 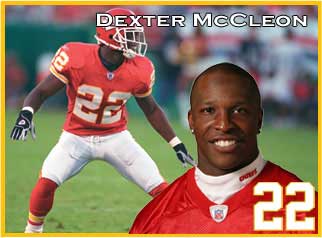 A second round pick by the Rams in 1997, McCleon had a very solid career in St. Louis for six seasons before winding down in Kansas City. McCleon played in 40 games, starting 27 of them. He snatched 10 INTs in that time as well. 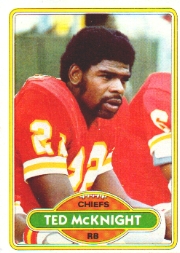 Even though he was drafted in the second round of the 1977 draft by the Oakland Raiders, the Chiefs were able to snag McKnight off waivers right before the start of the '77 season.

He would play four seasons in KC, both as a runningback and as a fullback. The KC Ambassadors have more:

Mitchell returned kicks and player corner for the Chiefs during a very successful time for the franchise. In seven seasons with the Chiefs, Mitchell had 16 interceptions returned over 60 kick off and punt returns.

Morris played in one NFL season and returned two kicks for a total of 17 yards. I can't find much info on him besides that. 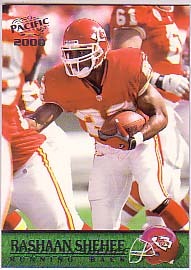 Drafted #88 overall by the Chiefs in 1998, Shehee came out of Washington with high expectations. Unfortunately, those were not met. In two seasons, Shehee had 87 carries 295 yards and one touchdown. He was part of the Chiefs runningback by committee deal back then, competing with the likes of Mike Cloud.

A former career rushing leader at K-State, J.J. Smith came to KC in 1995 as an undrafted free agent. He spent all 16 games of the 1995 season inactive before tearing his ACL in off season workouts in 1996. He would not play in the NFL again.