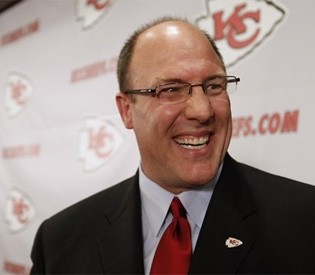 A couple of days ago, ground was broken on what will be the Kansas City Chiefs' new training camp home in St. Joseph, MO, at Missouri-Western University. Kevin Kietzman of 810 Sports interviewed St. Joe's mayor, Ken Shearin, on that day and it turned out to be a great interview.

The one-term mayor is a very likable fellow who is really just happy to be part of the team that brought the Chiefs' training camp to Missouri. And he does a pretty good job of painting the new Chiefs regime not as the secretive fortress as we know it but as a more open, more cordial setting than when Carl Peterson was around.

Wait. Say what? More accessible than the previous regime?

I took some notes and for the most part put them in my own words. It's not a complete transcript by any means. I left quite a bit out of the nearly 20-minute interview.

After the jump, check out some of Mayor Shearin's great lines about the new Chiefs regime, the old Chiefs regime and...udder balm? Yes, udder balm.

How difficult a task was this? Is the community on board?

The economic reality of the times increased the community's skepticism. This town has bled red and gold since I've been here - for 24 years. Missouri Western has already been strengthened - recruiting especially. It doesn't make sense to underestimate the power that goes beyond the time the Chiefs are in town. If River Falls can keep it 19 years, we can keep it 19 years. We're going to make this such a welcome experience - especially for the kids - they are going to gobble this Chief stuff up like a chicken after a junebug.

I made a statement today, you've probably got it on already, this probably happened because you have a man now running this Chief organization that's like a great good neighbor and not a king. It's opened up a lot of avenues in public relations opportunities that we really appreciate.

What has transpired in your dealings with the Chiefs over the last few months? Sounds like things are going very well as far as you're concerned.

You know, I don't want to say I was tentative about trying to get on the ground floor of what was going on. It was a welcome experience, an enjoyable experience to sit back and have people in the Chiefs organization act like and genuinely convinced me that they are as interested in the success of the training camp as we are.

In the previous regime, did they not seem interested?

We never had a talk with the previous regime. You had to go through armed guards and hallowed halls of glory to even try to talk to somebody in the old regime.

So this is quite a difference?

Is there anyone you want to mention in the Chiefs organization that have been really good to work with?

Everyone of them we've talked to. Denny's [Thum] one. The whole group that just came about has been just as easy talking to a voter who wants to complain about weeds on the sidewalk. It's just been amazing. I was expecting worse having worked with corporate people my whole life. I was anticipating the levels of bureaucracy we had to go to to get to the top. Not this time. This has been a hands on decision by me and the whole organization that made this thing happen so quickly.

The bottom line is that I've never had a team work so steadfastly connected on anything this important.

How about Scott Pioli? Have you had any new dealings with the general manager? Did he have any concerns about what the facilities would be like? What do you hear from the football side of things?

The football side of it...I'm not getting involved with it. That's not my business. The next thing I'm working on is getting the cheerleaders training camp here too.

Do you have current dorm facilities that will house the players?

Yes but that's a Chief decision. They're going to get out and about in this town. Hopefully they don't take...What's that gentleman's name that got in trouble every time he went out? I hope we don't have that here [Laughs].

You know what's great about this? The Chiefs will win twice as many games this year because of this decision.

Finally, the host pushes Mayor Shearin a bit to tell us about what he does for a living and as it turns out, Mayor Shearin is selling human udder balm. No more grease people!

I really enjoyed listening to Mayor Shearin on this podcast. He gave us some great quotes and some very interesting insight into how the Chiefs front office is conducting business.

Check out the podcast at 810Sports.com.