Former Chiefs QB Trent Green Gets a Job in TV

Share All sharing options for: Former Chiefs QB Trent Green Gets a Job in TV 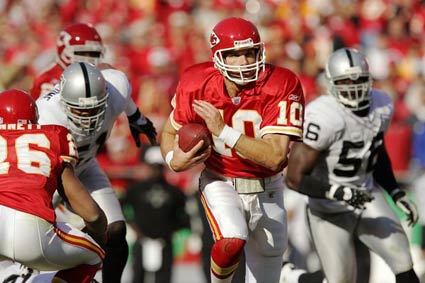 A former Kansas City Chiefs quarterback has a new job according to Randy Covitz of the Kansas City Star.  Trent Green will work two of the St. Louis Rams preseason games.  Both will be televised by the local FOX affiliate, KTVI.

Mr. Green will head to New York for the Rams first preseason game against the Jets on August 14th. The second game on August 21st will be in St. Louis against the Atlanta Falcons.

Story lines will be plentiful.  Green will get a shot at breaking down the play of Mark Sanchez's first professional game and we'll hear his take on recently departed Tony Gonzalez.

A former Rams tight end will work the final preseason game against the Chiefs.

Green has said he has and will maintain his residence in Kansas City.  He does, however, has some history with the Rams.  He was slated to be the starter in 1999 before a knee injury knocked him out in a preseason game giving way to the now famous career of Kurt Warner.  He then went back to the Rams after a one year stint in Miami.

Watching Trent Green on TV, you can tell he is very articulate and should excel in his new job.  He's a quarterback, and a smart one at that, which means he'll be able to provide plenty of insight into many facets of the game.  I look forward to watching his post-football debut.