The Greatest Kansas City Chiefs, By the Numbers: #19

Share All sharing options for: The Greatest Kansas City Chiefs, By the Numbers: #19 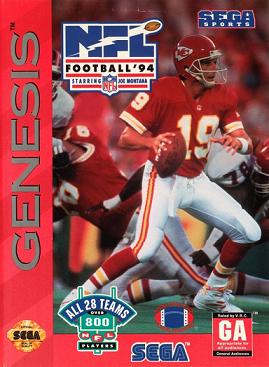 Anyone else have this game?

Only two Kansas City Chiefs have worn jersey #19 in the history of the franchise. Cotton Davidson, the original quarterback of the Chiefs' franchise, wore #19 for just over two seasons from 1960 to 1962.

After the jump, we take a closer look at both of these guys and how Joe Montana ended up with #19. 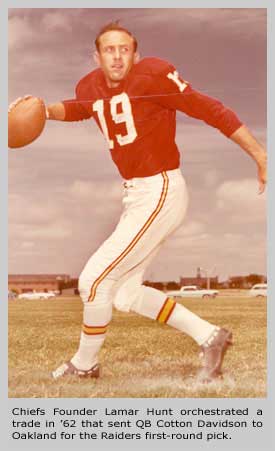 Drafted out of Baylor by the Baltimore Colts in 1954 with the fifth overall selection, Davidson became a Chief (Dallas Texan actually) in 1960. He went 12-13 in his career in KC, completing 46% of his passes and finishing with a 32:39 TO to INT ratio.

I've got an interesting piece of history for you here involving Davidson and it comes from the mothership talking about the 1961 season:

The club moved its training camp to Hunt’s alma mater of SMU and started the regular season at 3-1 before hitting a six-game losing skid, the longest such streak of Stram’s tenure with the franchise. One of those losses was a 28-21 decision in a Friday night contest at Boston (11/3) which featured a bizarre ending as a raincoat-clad fan knocked down a potential game-tying TD from Davidson to E Chris Burford on the game’s final play.

I can't find any more details about this so those that are reading that do remember what happened, please let us know!

Davidson was traded to the Oakland Raiders in 1963 for the #1 overall pick, which was used to select future Hall of Fame linebacker Buck Buchanan. Just a few months ago, Bob Gretz wrote about the trade at the mothership:

On Thursday, September 13, 1962, Hunt sent quarterback Cotton Davidson to Oakland in exchange for the Raiders first-round choice in the American Football League’s 1963 Draft and the negotiating rights to tackle Fred Miller. It was the only time in his life as owner of the franchise that Hunt made a personnel move without his head coach.

And when Hank Stram found out, he wasn’t happy. In fact in his book "They’re Playing My Game", Stram admitted he was "furious" because Lamar broke an "agreement that I would have complete control on such decisions."

Today, I don't think you could parlay the #5 overall pick in 1954 for the #1 overall pick nine years later and trade him to a division rival. Times have changed....

Cotton Davidson finished his career as an Oakland Raider, finally retiring in 1968. 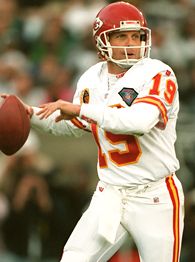 In 1993, the Chiefs traded the 18th overall pick in the NFL Draft for Joe Montana. The Chiefs also got a third round pick they used to draft WR Lake Dawson and veteran safety David Whitmore.

Montana's number in San Francisco was 16 but, of course, that number was already retired in the Ring of Honor. This Len Dawson guy wore it or something. Here's what the Chiefs did for Montana before he came to KC:

The Chiefs mailed three jerseys to Montana. One was number 3, his number from Notre Dame. Another was number 19, which he wore in little league and also briefly in training camp of the 1979 season with San Francisco, and the third was number 16, which Hall of Fame quarterback Len Dawson offered to let Montana wear since the organization had retired it. Montana declined Dawson's offer and wore 19 instead and signed a $10 million-dollar contract over three years.

Apparently, Montana chose #19 after adding his college number (3) to his long-time NFL number (16). Matt Cassel did a similar thing with his #7 jersey.

If you read Arrowhead Pride, you know Montana's story in KC. AFC Championship on 1993. Another playoff appearance in 1994.

Joe was 17-8 as a starter for the Chiefs, completing 60% of his passes and throwing 29 touchdowns to only 13 interceptions.

I'm not going to pour over facts that we all heard a million times before. Here are a few video clips of Joe's time in KC.

Almost 9 minutes of general highlights of Joe with the Chiefs:

And, in today's must watch video (which I'm sure you've seen before), the Sportscenter highlights from the classic Monday Night Battle between Montana and Elway:

I don't think this one will be close but for the record, Cotton Davidson deserves some respect for his role in Chiefs' franchise history.