The Greatest Kansas City Chiefs, By the Numbers: #18

Share All sharing options for: The Greatest Kansas City Chiefs, By the Numbers: #18

No Kansas City Chief will ever wear #18 again, thanks to Emmitt Thomas' induction into the Pro Football Hall of Fame last year. Samie Parker was the last Chief to wear #18, following in the footsteps of other great Chief wideouts like Sean LaChapelle.

Elvis Grbac makes his second appearance on this list. Grbac was #11 in the '97 and '98 seasons and then took #18 for his final two seasons in KC. I wasn't even going to include him but he did play half his career with one number and half with the other. If it leaned more heavily towards #11, I would have just left him out.

Data is pretty limited on Mr. Flynn's career. Pro Football Reference tells us that Flynn played in 14 games for the Dallas Texans in 1960 and six more the next season before leaving to play for New York Titans. This is all AFL stuff of course.

In Flynn's twenty games with the Chiefs, he had five INTs and he took one of those back to the house in November 1960. In that game, the Texans (Chiefs) routed the Bills 45 to 28.

Compiling a 26-21 record as a starter for the Chiefs, Grbac was a backup 49ers QB at the right time. The Chiefs were handing out starting jobs to 49er QBs left and right when Grbac came to KC in '97. Elvis completed a respectable 57.9% of his passes, with his best statistical season in KC in 1999, which is also the only year he started all 16 games for the Chiefs.

Elvis Grbac will probably be remembered most by KC fans for not being Rich Gannon, who Grbac "beat out" for the starting QB job after being injured in 1998. Also, he may be remembered for this. 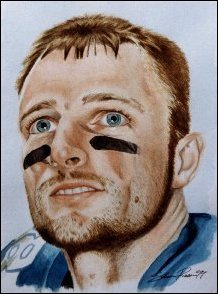 Greatest Claymore receiver ever? I think so. (via touchdownclaymores.com)

If you search the AP comments for "LaChapelle", you'll see we have four mentions of his name on this site. And three of them belong to the PARADE. The PARADE makes him out to be a Chief HOFer but it turns out he only played...wait I'm checking...one season for the Chiefs.

It was a pretty decent season though. 27 catches for 422 yards and 2 TDs (By the way, for you grammar snobs out there, we are fully aware of our inconsistency in spelling out numbers versus putting down their numerical value).

LaChapelle was working for a California construction company when the Chiefs called him to try out for the team in 1996. He had also just played a season for the Scottish Claymores in the World League in 1996.

Now here is a sentence that will blow your mind this morning. That is, if you've been reading our Greatest Chiefs by the Numbers posts or you just know your Chiefs players. From a 1996 article on the World League:

Scotland then lost their most productive player, Sean LaChapelle, who limped out of the game with a groin strain, but Yo Murphy filled the void with a game-winning contribution.

Woh man. Strange things man....strange things....And because that is now reminding me of "Bad Things," here is that Dennis Hopper Nike commercial from back in the day: 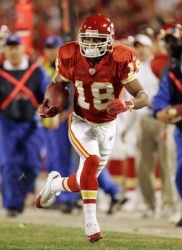 Parker gets a lot of flak thrown his way for annoying first down dances but the guy doesn't deserve nearly the ire that most Chiefs fans give him. He was drafted in the fourth round of the 2004 draft and went on to have seasons of 9, 36, 41 and 24 receptions respectively. You'd probably expect a bit more production from a fourth rounder but remember the Chiefs were still throwing it to Tony Gonzalez all they could while Parker was a Chief.

Samie Parker won't win this poll by any means but he also wasn't a terrible player. Just an underachiever and even that label is a bit of a stretch. What did we seriously expect out of this guy? To be the next Jerry Rice? 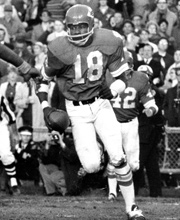 Wikipedia has a nice little list of some of Emmitt Thomas' accomplishments and they sure do look impressive all in a row:

Emmitt Thomas was an undrafted free agent who the Chiefs signed in 1966. He was instrumental in the Chiefs' Super Bowl run in 1969. Thomas was enshrined in the Pro Football Hall of Fame last year.

Hmm...you think Emmitt Thomas is going to win our poll today? I think so.