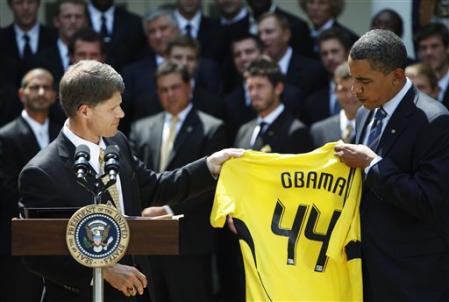 Kansas City Chiefs owner Clark Hunt made the trek out to Washington D.C. today to meet President Obama.  No, no, the Chiefs didn't win the Super Bowl while you were away on summer vacation.  Being the billionaire that he is, Mr. Hunt does have other ventures.

Mr. Hunt presented President Obama with a Crew #44 jersey after taking a tour of the White House.  And in keeping in line with the Hunt's commitment to the community, the team participated in a public service clean up project around the D.C. area.

Check out a quick summary of the Hunt family's connection to soccer after the jump.

Clark Hunt and his family have quite the connection with soccer.  From the Mothership:

The Hunt Family has proudly played an integral role in the evolution of professional soccer in the United States. Lamar Hunt is enshrined in the U.S. Soccer Hall of Fame and was one of the key figures behind the formation of the North American Soccer League (NASL), which included his Dallas Tornado franchise. The Hunts were also intimately involved in the creation of Major League Soccer, which was launched in ‘95. In addition, the Hunt Family has played a key role in the construction of two of the country’s premier soccer-specific venues – Crew Stadium (Columbus, OH) and Pizza Hut Park (Frisco, TX). Clark Hunt played the game at the collegiate level, serving as a four-year letterman on the SMU soccer squad.

This is Clark Hunt's second championship when his other team, the Wizards, won the MLS Cup in 2000.  Geez...can't we get him a non-soccer trophy?

Check out a photo gallery here.

Congratulations to the Hunt family and the Columbus Crew.  Next year we hope to see President Obama wearing a Chiefs jersey.