The Greatest Kansas City Chiefs, By the Numbers: #15

Share All sharing options for: The Greatest Kansas City Chiefs, By the Numbers: #15

Current #15 on the Kansas City Chiefs, QB Ingle Martin, seems to fit in well with this bunch of guys. Backup QBs, kickers...That's right about where his effectiveness level is going to be in the NFL for his career.

As you can see, this list isn't entirely impressive. Personally, there's only one guy on here who should clearly win the poll IMO.

Click through to go on the magical journey that is the history of the Chiefs' #15.... 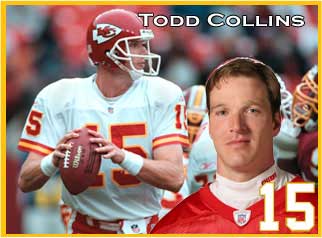 Besides starting 13 games in 1997 for the Buffalo Bills, Todd Collins has had a most unassuming career in the NFL as a backup QB.

Drafted in the second round by the Bills in 1995, Collins backed up Jim Kelly until the HOF quarterback retired in 1996. Collins beat out another former Chief Alex Van Pelt in 1997 for the starting gig.

Collins moved to KC in 1998, mainly backing up Elvis Grbac and Warren Moon initially. He played in 13 games over his career as a Chief, passing for one touchdown and completing 18/27 passes. He finished his career in Washington.

Todd Collins is perhaps best remembered for getting me chewed out by you guys way back in September 2007 for comparing him to Damon Huard. 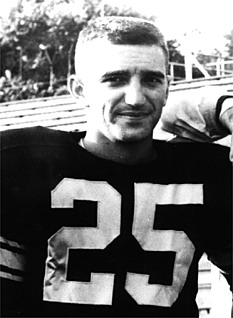 Duncan had a very short NFL career after a fantastic college career at Iowa that resulted in him being elected to the College Football Hall of Fame.

Duncan was drafted by the Packers in 1959 but went to play for the CFL, where the money was better. He came to KC in 1961, practiced with the team and went to law school at night before retiring once Lenny Dawson came on board.

I wrote about Jacky Lee last year for the When We Were Champions Series. Here is that text:

If you're even a casual Kansas City Chiefs fan and you're asked who was the team's starting quarterback in its only Super Bowl win, you immediately, without even thinking, spit out "Len Dawson". If you lived in that era, or are an especially voracious young researcher, you may know that Mike Livingston was the Chiefs backup quarterback .

I doubt many of you know well the name of the third string quarterback during the Chiefs Super Bowl run - Jacky Lee.

Lee was drafted by the AFL's Houston Oilers in 1960 and backed up George Blanda for four seasons there. He then went to Denver for two seasons, back to Houston for another one and half and finally ended his career with two seasons in Kansas City. Lee is one of only twenty players who played in each of the ten season's the AFL existed.

Lee didn't just ride the bench while playing behind George Blanda in Houston. He played in every game in his first four AFL seasons, starting seven of them. A 1962 Sports Illustrated referred to Blanda and Lee as "the best set of quarterbacks in the AFL."

Here is a curious snippet from a 1966 SI issue:

Also missing is Quarterback Jacky Lee , who has returned to Houston after a two-year lend-lease deal.

A leased player? I'm probably showing my age here but I wasn't aware that players in the AFL were leased from team to team. Can you imagine if that was practiced today?

Jacky Lee is also quietly known for a monstrous game he had as an Oiler against the Boston Patriots in 1961. During the week leading up to the game, the Oilers' head coach Lou Rymkus was on the hot seat, prompting unrest in the ranks. Here's a snapshot:

For the Patriots game, Rymkus went with backup quarterback Jacky Lee. Ignoring a gathering fog that rolled in from the nearby Charles River, Lee completed 27 passes for an AFL-record 457 yards. Hennigan hauled in 13 of those passes to set another league mark. Still, Houston trailed 31-28 with five seconds left in the game. With the ball on the Boston 14-yard line, Rymkus sent Blanda in to attempt the game tying field goal.

In the Houston huddle, an Oiler player who had been benched by Rymkus offered advice. "Miss it George," he whispered to Blanda. "Teach the son of a bitch a lesson he'll never forget."

Incensed, Blanda grabbed the player by the jersey. "Don't ever say that to me again." Blanda's ensuing field goal was good and the Oilers left Boston with a tie.

Jacky Lee left his second tenure in Houston to spend part of the 1967 season and the full 1968 and 1969 seasons in Kansas City. He started two games in KC and played in nine of them.

Now the mothership says that Longmire's years with the Chiefs were from 1976-1978 but the only Sam Longmire I can find connected with the Chiefs played from 1967-1968. He played in five games over those two seasons, starting none of them. As far as I can find, he didn't register any stats.

Matthews was a Chief for three seasons during the Montana/Bono years after being drafted in the seventh round by the Chiefs in 1994. He didn't register any stats or play in any games during those three seasons. He finished his career in Jacksonville.

Mercer spent 10 games of the '66 season with the Chiefs, after spending time in Oakland and Minnesota to start his career. He was 20/26 in his 10 games and missed two extra points. I love this info from his Wiki page:

Mercer's 9 yard field goal attempt was blocked by Larry "Wildman" Eisenhauer and recovered by Don Webb, with about 3 minutes left, in the Oakland Raiders 43-43 tie with the Boston Patriots on October 16, 1964.

Good to know. Mercer played pretty well when he was a Chief. His four field goals in mid-December of 1966 help the Chiefs beat the Chargers on their way to the playoffs and eventually the AFL Championship that year. 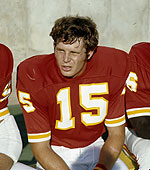 Reardon was a kick returner when the Chiefs drafted him in the sixth round in 1971. Interestingly enough, as I'm looking up his stats, the Chiefs split up their kick and punt return duties quite a bit that year. It's just very different than it is today.

Reardon slowly moved away from returning kicks to become a cornerback, where he played quite well. He had fourteen interceptions in four seasons with the Chiefs. 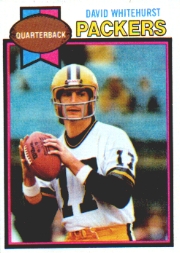 The Chiefs' presumed starter back in 1984 was QB Bill Kenney. Kenney broke his thumb in the final game of the preseason and David Whitehurst was signed in September to be the team's #3 QB. Whitehurst had been a Packer his entire career and only stayed on with the Chiefs until October when he was released.