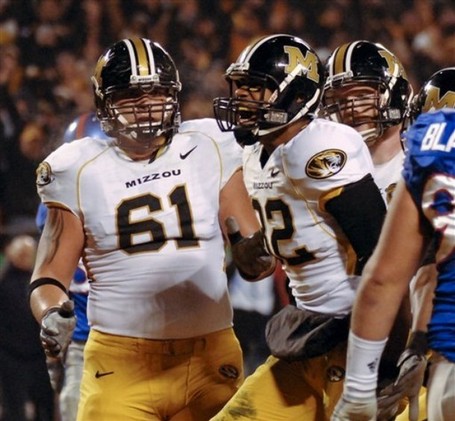 The Kansas City Chiefs fifth round selection of Missouri OT Colin Brown raised a few eyebrows among draftniks and possibly even with Brown himself. Some labeled it a reach and, after speaking with Dave Matter of the Columbia Daily Tribune, it seems that no one quite expected Brown to go that high in the draft, if at all. But if we've learned anything about the new Chiefs regime, it's to never discount the unexpected (considering they never tell you anything in advance anyway).

Matter recently spoke with Arrowhead Pride about the Chiefs new tackle to give us insight into his playing style at Mizzou, the incredible size and agility Brown provides and a hopeful comparison at the pro level.

AP: Did you have draft predictions for Colin Brown?

Dave Matter: I wasn't sure Brown would be drafted at all. And neither was he. I thought maybe his size alone would get him some looks in the seventh round, certainly in free agency. But there didn't seem to be much buzz about him leading up to the draft.

AP: What do you think the Chiefs saw in Brown to draft him in the fifth round?

DM: His size and power are impossible to ignore. But he's pretty agile for a 6-8 guy who weighs in the 330-pound range. He was out on an island in Missouri's system, a scheme that uses extraordinarily wide splits between linemen. Plus, he never had a tight end lined up next to him to help block. So, for a guy that big to have to cover that much ground was pretty impressive. The style of offense was different than what he'll experience in the NFL, but the transition shouldn't be as difficult when it comes to pass blocking.

AP: What about the downsides to his current game he needs to work on?

DM: He doesn't have much experience blocking within a prototypical NFL running game. Missouri almost exclusively ran zone running plays where backs would take a delayed handoff out of the shotgun, pick a hole along the line and go from there. I wouldn't say this makes for a weakness, but Brown just doesn't have recent experience within a pro-style offense.

AP: Any comparisons at the pro level?

DM: Physically, I'd compare him to Jon Runyan. They're about the same size. Huge frames, around 330 but still agile enough to protect the edge. Brown's not a tremendous athlete, but he was mobile enough at Missouri to comfortably carry that frame and block in space.

AP: Do you know anything about his personal interaction in the locker room or team personality?

DM: He doesn't seem to have a very colorful or outgoing personality on the field. Just a tough, no-nonsense, small-town guy. Missouri has a tradition of finding similar small-town Missouri natives to plug into its offensive line. Quiet, low key guys who go about their job without much fanfare but are pretty tight-knit on and off the field. Colin fit that mold perfectly. He does have an an impressive tattoo collection on his back and down his arms.

AP: What advice would you have for Chiefs coaches in how to properly utilize Brown's talents?

DM: The Chiefs need to understand Brown played in a college offense that was significantly different from the NFL's normal structures. So, it might take him some time to adjust to putting his hand in the dirt and not constantly playing in a two-point stance and isolated in space. Strength and toughness shouldn't be a concern with Brown. He's a good kid who overcame being an obscure walk-on whom Missouri couldn't find a spot for him along the offensive line. He literally played at every position before he settled in at right tackle and started there for two years.

Many thanks to Dave for taking the time to talk with us.