Photos and Updates from Day Two of Chiefs Minicamp

Share All sharing options for: Photos and Updates from Day Two of Chiefs Minicamp 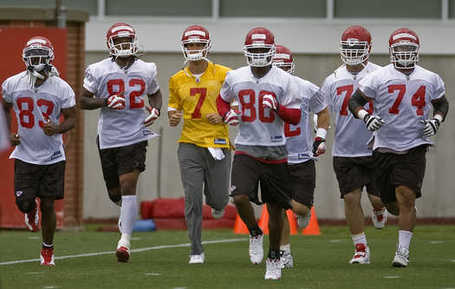 Check up on the AFC West with Bill Williamson answering questions at his ESPN AFC West blog.

The offense looked terrible in the afternoon practice according to Bob Gretz (H/T woodman212 in the FanShots).

Things got worse in the teamwork portion of the practice.  The Chiefs ran 12 plays and only three gained more than a few yards.  There were two near interceptions by the defense, which twice snuffed out screen passes behind the line of scrimmage.  The last play of teamwork and the practice ended with a shotgun snap from C Rudy Niswanger sailing over the head of Cassel.

There's one more practice tomorrow morning then we'll have a full wrap up of everything you need to know about the Chiefs mandatory camp.  I have had a long day and am headed to bed early tonight so expect the updates to start early tomorrow.

Have a good Saturday everyone.