Kansas City Chiefs Wrap Up Day One of Mandatory Mini-Camp

Share All sharing options for: Kansas City Chiefs Wrap Up Day One of Mandatory Mini-Camp 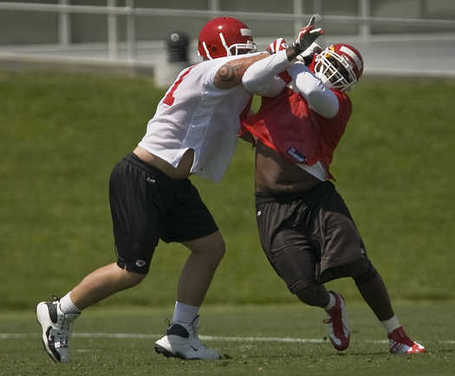 The big news today is of course that Brian Waters and Mike Vrabel attended today's mini-camp.  Neither player had been at any of the voluntary practices over the last six weeks.  Despite the whirlwind of media reports following the morning practice, there was still an afternoon practice.

Most of this is from Bob Gretz.

Barth was 5/6 in attempts from 28-36 yards while Succop was 7/7.  Even though it's only June, it appears Succop has the lead in this battle.  He was a draft pick so you have to think he's got a leg up on Barth already.

Dorsey is still rehabbing an injury (not serious) so we've yet to see how the "first team" defense will line up.  Will it be Magee or Dorsey?  I gotta think it's going to be Dorsey depending on how he transitions to the end.

Right now there's a first rounder and two third rounders lining up on the defensive line.  If Dorsey gets the nod at the end position opposite Jackson, that would make it two first rounders and a third rounder.  Not a bad investment of talent there.

Given the right situation I think Hali can be successful rushing the passer as an outside linebacker.  He's never played the position before so it'll take some time but I think he can do it.  Unfortunately, there's more to playing without your hand on the ground than just rushing the passer.

This nugget from Bob Gretz might not bode well for Hali's chances in coverage:

Hali was covering TE Tony Curtis and got a good push on him within five yards, but then lost him at the end of the route.

FB Mike Cox ran over both Dacus and S Jarrad Page as they were trying to cover him.

Worst kept secret in the NFL.

According to Gretz, Derrick Johnson intercepted a pass intended for Larry Johnson while in under coverage.  He later got his hands on a pass while dropping back in coverage.  This is a good sign for him.  I never doubted his athletic ability, because he's got a lot of that, but he never quite seemed to explode the way we always thought he would.

Let's hope the Zach Thomas tutorial he's receiving does well for him.

What did we do before Bob Gretz launched his website?  He's a great resource.

Practice continues tomorrow morning and we'll be at it all day.  Chris is traveling (again?) this weekend so you'll be stuck with me (again?).  Check back in the morning for more.