Brian Waters: 'As of Today, I'm a Kansas City Chief'

Share All sharing options for: Brian Waters: 'As of Today, I'm a Kansas City Chief' 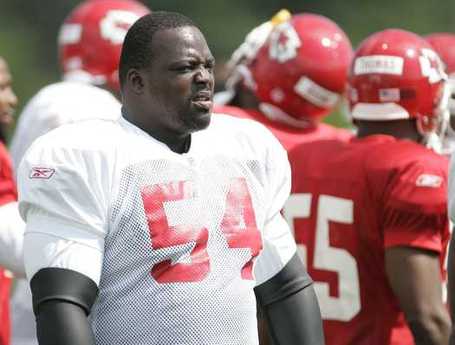 Kansas City Chiefs guard Brian Waters did show up to mini-camp today after a flurry of questions over the last few months regarding his desire to be with the Chiefs.  Waters spoke to reporters following the morning practice.  Bob Gretz has the scoop.

"I’m glad to be here with my teammates.  I don’t know what’s going to happen in the future.  Whatever happens in the future is going to be between me and the organization. As of today, I"m a Kansas City Chief."

Click through to catch the rest of his session with reporters where he reveals more.

He also tried to clear up a lot of questions regarding his absence during the team's previous voluntary mini-camps.  Multiple media outlets reported that his absence was due to his reported tiff with Chiefs management.  Not so, says Waters.

As far as the charity event that he reportedly skipped on Wednesday night, he said he had no idea he had missed the event.

Sorry.  Not buying that last one.  He's an honorary co-chair.  He can't act like he had no idea what was going on.

Whatever the issue is, Waters appears to be playing nice.  He wasn't definitive in his desire to stay in Kansas City but reiterated that this is all about football at this point.  It doesn't hurt that the Chiefs could fine him over $9,000 for missing this weekend's practice.