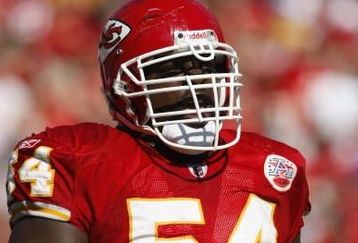 As expected, much of this drama surrounding Brian Waters, and to a certain degree Mike Vrabel, was for nothing. From the venerable Kent Babb:

After missing all of the previous offseason workouts, guard Brian Waters and linebacker Mike Vrabel arrived today for the first day of the Chiefs' mandatory minicamp.

Waters and Vrabel would have been levied a $9,079 fine for missing minicamp. The NFL's Collective Bargaining Agreement is not clear if that is a lump sum fine or a daily fine.

Every player but rookie CB Donald Washington should be in camp right now. Washington cannot attend any Chiefs' practices until he graduates from Ohio St. University this month.

Plenty of drama for nothing. Welcome to the off season, in case you hadn't noticed. The Chiefs' mandatory minicamp runs through this weekend. Next week, the team will conduct more OTAs.

Check back in a bit for the inevitable Todd Haley press conference and video. We'll post it ASAP.

Click through to see a time line of the good, the bad and the ugly of the Brian Waters drama dating back to December 2008.

Things We Can Hopefully Agree Upon - Arrowhead Pride[December 10th, 2008] Regarding the state of our offensive line back then, Chris said it best.

"Frankly, get rid of everyone but Brian Waters and Branden Albert."

2008 Chiefs Pro Bowlers: Who Got Snubbed? - Arrowhead Pride[December 16th, 2008] Brian Waters is awarded his 4th Pro Bowl appearance. He and Tony Gonzalez are the only 2008 Chiefs to garner the honor.

"Surprisingly, the Chiefs rushing offense splits their time evenly rushing to the left and right side.  They are successful running to the right end, gaining 5.67 yards per carry which is good for 6th in the NFL.  Do you think Waters' pulling to that side has anything to do with that statistic?"

Brian Waters is a Blessing to the Kansas City Community - Arrowhead Pride[January 12th, 2009] My how times have changed...

"Thanks to Brian Waters countless kids will have a Thanksgiving dinner, go to college for free, receive Christmas gifts or be given a helping hand from an NFL player. "Coming from someone who has grown up and still lives in the Kansas City community, thank you Brian Waters."

Where We Stand: The Kansas City Chiefs Offensive Line - Arrowhead PrideBrian Waters started all 16 games for the Chiefs in 2008. He and Brandon Albert were the only pleasing parts of the line.

"Kansas City Chiefs All Pro G Brian Waters asked to be traded or released following Scott Pioli's refusal to meet with the veteran regarding his future with the team."

Report: Bills Interested in Trading for Chiefs OG Brian Waters - Arrowhead Pride[March 1st, 2009] Reports surface that the Buffalo Bills may be interested in trading for Waters but nothing was ever confirmed. Waters acting as his own agent may represent a liability in his ability to get a trade done.

Todd Haley: Tyler Thigpen Will Compete for the Starting QB Job - Arrowhead Pride[March 2nd, 2008] Head coach Todd Haley is asked about Brian Waters and for the first (but certainly not last) time he declines to speak about it.

Former Chargers Guard Mike Goff Visits Chiefs - Arrowhead Pride[March 17th, 2009] Reports surfaced that the Chiefs were hosting Mike Goff, formerly of the San Diego Chargers. At the time, we wondered if his visit had anything to do with Waters' unhappiness in Kansas City.

Clark Hunt Says the Chiefs will Keep Tony Gonzalez; Not Sure on Larry Johnson and Brian Waters - Arrowhead Pride[March 24th, 2009] Clark Hunt said no decision had been made on Brian Waters' future. Again, Chris sums it up nicely.

"Boom. Sit down Brian Waters. Time to change your diapers. This ain't your old Chiefs team anymore. I don't care about the new staff being too harsh or too inconsiderate. Winning is the bottom line. Not making friends."

Who Will Show Up to the Chiefs Offseason Program Today? - Arrowhead Pride[March 30th, 2009] The first day of the Chiefs offseason program left us wondering whether Waters would show up, much like today.

"Is Waters over his issues with management?  Did the Cassel trade help quell any questions about the Chiefs commitment to winning?  Does Waters still want a trade?"

Gonzalez, Waters Missing from the Chiefs Morning Practice - Arrowhead Pride[April 18th, 2009] Waters doesn't show for another voluntary mini-camp. We see a possible glimmer of the future when Wade Smith lines up in his spot.

"Sometimes, not attending these sessions is a way of telling management that they're unhappy with something.  This is likely the case with Waters.  He's not a fringe roster guy so it's not like he needs to be there to state his case to make the team (like 90% of the other players on the team)."

Ranking the Kansas City Chiefs by Position - Arrowhead Pride[May 24th, 2009] A ranking of NFL players by position puts Waters as the 3rd best guard in the NFL.
Chiefs' McIntosh Thinks Brian Waters Will be Back - Arrowhead Pride[May 30th, 2009] "He’s a year older and maybe weighing all of his options. I support him. In my mind, I think he’ll be back. I’m sure he’ll show up when he’s ready. He’s still got it. If he didn’t, he wouldn’t have played the way he did last year and he wouldn’t have gone to the Pro Bowl."
Will Brian Waters Show Up for the Chiefs Mandatory Mini-Camp Tomorrow? - Arrowhead Pride[June 4th, 2009] Will he show?
"That leaves Mr. Brian Waters. The Chiefs' NFLPA representative. Former United Way spokesman. And all around fantastic guy."
Caption This Brian Waters Photo - Arrowhead Pride[June 4th, 2009] Funny caption this from Chris:
Waters: I'm talking with Coach Haley and he straight up tells me that Texas BBQ is better than Kansas City BBQ.
Palmer: So you requested a trade?
Waters: I can't play for a guy that doesn't respect the KC BBQ.
Report: Chiefs' Waters a No Show for Charity Event; Attendance at Mini-Camp Unlikely? - Arrowhead Pride[June 4th, 2009] My prediction on what will happen...
"This is so out of character from what we've heard and seen written about Brian Waters that I am still guessing he will attend the mini-camp.  It's one thing to miss out on practice, it's another to miss out on a charity event, which is why I don't think this is an indication of anything."