Word is that Brian Waters is in Kansas City

Share All sharing options for: Word is that Brian Waters is in Kansas City 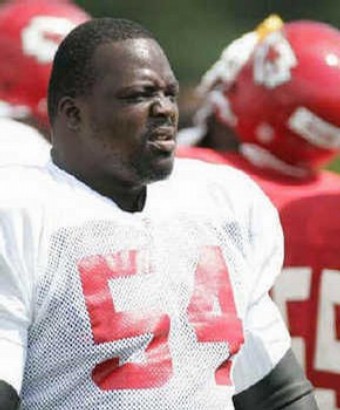 Despite his absence from OTAs and other team activities this Spring, according to our source, Waters has arrived in Kansas City.

What does this mean?  It could mean nothing or it could mean everything.  We just don't know at this point but if there's going to be any kind of resolution to this situation it has to start with the man first being in Kansas City and second heading out to Arrowhead.

Keep an eye out for any more information coming out of outlets like Warpaint Illustrated.

In case you haven't been around lately, it's unofficially been Brian Waters Day around Arrowhead Pride.

53% of you think he'll show up to Friday's mandatory workout.  Chris said that if he shows up, everything is back to normal.  But if he doesn't...the Chiefs have to start thinking about who will replace him in the event this gets even more serious.

We had a very funny Caption This contest with Waters.

Reports begin to come out that he skipped a charity function that he was scheduled to attend.  The bad news is that he was an honorary co-chair of the organization.  The good news is...well, there is no good news here.  The Chiefs hadn't heard if he was coming or not, and we find out later that the charity itself, First Downs for Down Syndrome, was expecting him to be there.

Make sure you check back in the morning as we'll undoubtedly be full of Brian Waters speculation and coverage.  We should know by late morning or early afternoon if the Pro Bowl guard checks into Arrowhead.