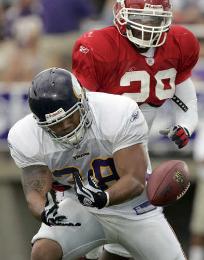 The Kansas City Chiefs annual scrimmage against the Minnesota Vikings won't happen this year according to Brad Childress.  The Vikings head coach caught up with Chiefs new GM Scott Pioli at the NFL Combine and asked about the two teams practicing with each other.

The St. Paul Pioneer Presss caught up with Childress and asked about the 2009 version of the scrimmage.

"They got so many different things going on ... they're thinking this year that they don't want to do it," Childress said today. "That's good with us."

From several accounts, the scrimmages were a good practice between the two squads so they could see some limited game action to judge the progress of the players.

Last year's scrimmage was uneventful to say the least.  The anticipation of Jared Allen returning to face his former team was deflated when Childress announced Allen and a number of other veterans wouldn't make the trip.  The year before that, Herm Edwards second in Kansas City, the scrimmage was cut short because of some "short fuses" according to the Chiefs former head coach.

"Everybody had short fuses tonight, and you can anticipate that kind of stuff," Edwards said of the scuffle that broke out between members of the Minnesota defense and the Kansas City offense about 75 minutes into the evening. "One thing leads to another, and you know what's going to happen."

Looks like the secrecy in Kansas City will continue right up to the opening whistle of the regular season.