Share All sharing options for: Free Agent LB Willie McGinest Looking to Play in a 3-4 Defense 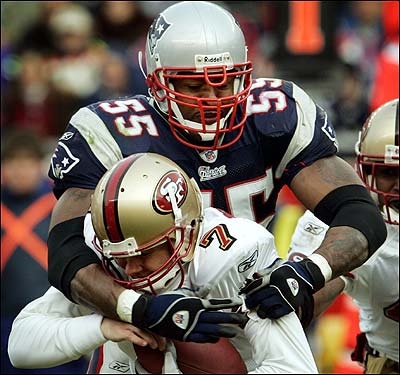 Former New England Patriots and Cleveland Browns LB/DE Willie McGinest has his sights set on one more year in the NFL.  If the free agent had his way, it would be in a 3-4 defense.  Considering the jump his sack totals took in the first year he moved from defensive end to linebacker in the Patriots 3-4 (5.5 to 9.5), this is the best move for him statistically.

A long-time veteran of the 3-4 defense in New England and Cleveland, McGinest said he would be interested in playing for someone from the Bill Parcells or Bill Belichick coaching tree.  When asked by Albert Breer of The Sporting News what he wants in a team for final NFL season, he said familiarity with the defense is a must.

Hmm...the Kansas City Chiefs run a 3-4 and Todd Haley is very clear of what he expects of his players.  Let's see how he might fit with the Chiefs:

There are plenty of downsides including age (37) and ability (One sack in '08) but those same concerns have been brought up with other acquisitions by the new regime this offseason namely Zach Thomas and Mike Vrabel.

The potential snafu in this plan would be whether Pioli's former colleagues in Foxboro, MA would be interested in him.  According to McGinest, going back to the team that drafted him 15 years ago "wouldn't be a bad way to finish up."

Why wouldn't you want to go to a really good team, which is always close to the Super Bowl, which was in one a couple years ago, was a game away from another one, which has great coaching and is a great organization with a well put-together roster?

Considering Scott Pioli's affinity for veterans that can teach the youngsters the ropes and players with whom he's familiar, I wouldn't be surprised if the Chiefs were one of the teams McGinest said he's had a "few talks" with.  Whether McGinest gets a better offer is the question.