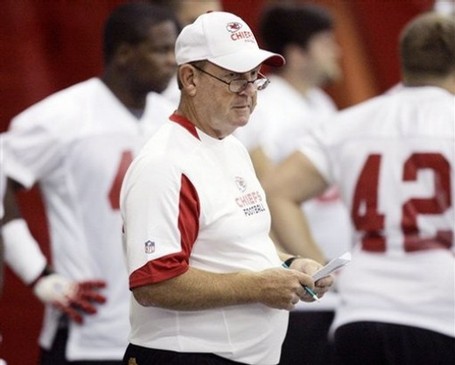 The last time The Sporting News compiled a set of rankings, the Kansas City Chiefs didn't fare so well.  This time, however, the Chiefs did just fine.  TSN created a list of the top 20 offensive coordinators in the NFL.  Coming in at No. 2, and rightfully so, was the Chiefs' Chan Gailey, who is entering his second season with the team.

The publication gets it right with this one.  Former Miami Dolphins head coach Cam Cameron, currently offensive coordinator of the Baltimore Ravens, is ranked No. 1. Here's what the RealScouts, a collection of former NFL scouts, had to say about Gailey:

Gailey's shotgun-heavy attack is a perfect philosophical fit with new coach Todd Haley. It also will limit the learning curve of QB Matt Cassel, who played in a similar system last season in New England. The Chiefs will attack through the air and could have the NFL's most improved offense in '09.

I recently got asked by another online publication why keeping Chan Gailey was one of the best decisions the Chiefs could have made.  I relayed this story, found in our FanShot section, of Gailey's first encounter with Kordell Stewart while with the Pittsburgh Steelers in 1996.

Chan Gailey, their Offensive Coordinator, came up with an idea. "Let’s make him a slash," he said.

Right now the Chiefs have a luxury with Matt Cassel and Tyler Thigpen.  For a variety of reasons, whether it be talent or money, we all expect Cassel to be penciled in as the starter.  This leaves the Chiefs with a luxury in a mobile, athletic player in Thigpen, in a time when the wildcat is all the rage.

For those of you upset that Cassel will likely be given the starting job, remember Gailey's time with Kordell Stewart.  Thigpen will get on the field.  He may not be lined up as a traditional quarterback but he'll get on the field.

Here are a few places we've talked about Chan Gailey over the past few months:

January 17th: Following the hiring of Scott Pioli as GM, and with the future of Herm Edwards in doubt, we asked if the Chiefs offensive coaches would be sticking around.

January 28th: Following the departure of Herm Edwards, I argued the Chiefs should hire Gailey as head coach.

February 3rd: I faced off against Adam of Arrowhead Addict arguing the Chiefs should hire Gailey over Todd Haley as head coach.

February 11th: Should Haley call his own players or defer to Gailey?

February 12th: A statistical look at the similarities between Haley and Gailey's playcalling (includes graphs!).

March 2nd: What to do with Tyler Thigpen?  This question became relevant only because of the offense Gailey instilled for Thigpen last season.

March 16th: Gailey will coach quarterbacks along with being the offensive coordinator.

Best in the West: No other AFC West coordinator showed up on the list until the Oakland Raiders' Ted Tollner at No. 19.

H/T ttownmikey for the link in the comments