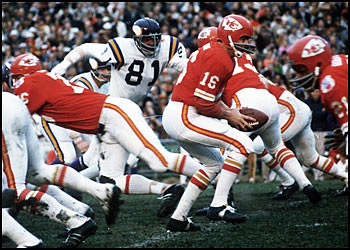 "To be in Green Bay all those years and then go to Minnesota, that will arouse a lot of people. … This is a strong rival, not just a rival."

Lenny should know about rivals considering he was at the forefront of some of the oldest rivalries in the AFC while with the Chiefs - mainly against the Oakland Raiders and Denver Broncos.  When asked if he would ever think about playing for a division rival, like the Raiders or Broncos, Mr. Dawson was polite and to the point.

Dawson played 19 years in the NFL.  His first five seasons he attempted 45 passes.  Like Favre with the Falcons, Dawson didn't make a name for himself until he had switched teams.  But after 14 years with the Chiefs, Lenny knew his career was winding down and he wasn't the player used to be.  He cautioned Favre's motivations, in particular the alleged "revenge" factor, saying even with all the talent around him he has to know when enough is enough.

One difference between the two, is that Favre hasn't missed a game in 17 years, while Dawson only started in 19 games his final three years in the league.

H/T tomahawk44 in the FanShots