Will Tyler Thigpen be a Spread-Only QB for the Kansas City Chiefs?

Share All sharing options for: Will Tyler Thigpen be a Spread-Only QB for the Kansas City Chiefs? 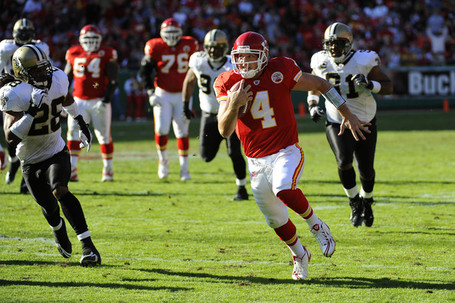 When the Chiefs pulled the trigger on the trade that brought Matt Cassel and his $14.651 million franchise tender to Kansas City, it was a foregone conclusion that there was a new starting quarterback in town.  Tyler Thigpen's rise to the position in 2008 triggered a change in offensive philosophy from Herm Edwards' conservative, run-first approach to a college feel spread-it-out passing attack.  The idea behind it was to capitalize on Thigpen's strengths as a spread passer and further utilize his biggest asset - his legs.

The Chiefs use of the spread offense last season wasn't the first of it's kind.  Bill Belichick has been making trips down to Gainesville, FL the last three years to talk offense with Gators head coach Urban Meyer.  The NFL head coach has been trying to glean as much information from the college coach in attempting to give the college spread an NFL feel.

"Everyone knows how I feel about Bill Belichick," Meyer said. "How is it that Tom Brady and this guy [Cassel] who never even started a game in college can make it work? Because Bill Belichick adapts. ... And the Miami Dolphins were 0-and-whatever [in '07] and they adapted to what they had. All of a sudden, the running back was taking snaps and they were winning games."

Meyer also said at least three NFL teams have contacted him regarding the spread offense.  Are the Chiefs one of those three teams?

Chris Harry of the Orlanda-Sentinel writes an in-depth article on the spread offense, Meyer's influence and how it will translate to the NFL.  It's really worth a read.  Check it out.

Tampa Bay Buccaneers defensive coordinator Jim Bates said having a player on the roster designated as a "spread-only" quarterback presents a real "double jeopardy" and cites Larry Johnson and Percy Harvin among others as players that have lined up at quarterback.

But the real threat, Harry supposes, are the Pat Whites and Tim Tebows of the world.  NFL teams wouldn't dare put their franchise quarterback in harm's way, but what about running the 240 pound Tebow straight up on a 240 pound middle linebacker?  It's an interesting thought that would only happen if a team had A) a traditional quarterback and B) a "spread-only" quarterback.  Meyer referenced the season-ending injuries of Carson Palmer and Tom Brady and said when they're in the pocket throwing the ball is the only time their knee is ever locked and presents the potential for these types of injuries.

Definitely check out the article. The whole time I was thinking, 'This IS Tyler Thigpen.'  With Chan Gailey's innovative offense, Todd Haley's background with passers and Scott Pioli's history with Belichick, I'm feeling more and more the Chiefs were one of the teams that contacted Meyer about the offense and that Thigpen could be one of the best 'spread-only' quarterbacks in the NFL.

I'll leave you with a couple interesting quotes on the topic.

"We draft guys into this league that play in the spread offense. I don't know why the offense can't get drafted, too."

"If you know me, you know I think any offense can work if you put the right personnel back there. Offenses are overrated. People are not."